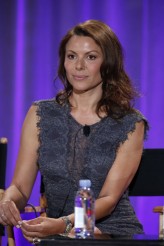 Her character plays Fin's sister in the new SyFy movie 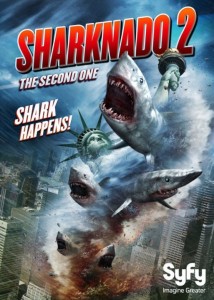 SHARKNADO was the surprise phenomenon of the summer of 2013. On screen, a hurricane full of killer sharks flooded Los Angeles. Off-screen, it got mentioned everywhere, from Time Magazine to THE TODAY SHOW, had sold-out midnight screenings and caused Twitter to explode.

In SHARKNADO 2: THE SECOND ONE, which will premiere July 30 on the Syfy Channel, New York City is beset by the combination of excess water and huge toothy fish. Fin and April Shepard (Ian Ziering and Tara Reid), who bested the SHARKNADO of the first film, happen to be visiting when Great Whites begin taking bites of the Big Apple. Director Anthony C. Ferrante and screenwriter Thunder Levin are both back from the first film.

ASSIGNMENT X: Did you have any opinions about real sharks before doing this movie?

KARI WUHRER: I’m fascinated by sharks – I was excited when Shark Week would come every July [on Discovery Channel]. And I don’t go in the water and I don’t surf any more, because I think Spielberg ruined that for me when I was eleven, but I think they’re terrifying. And in this movie in particular, they’re given almost a vengeful personality, and so that makes them even scarier.

AX: When you were a series regular on SLIDERS, you visited some strange dimensions. Was there anything like a Sharknado universe when you were on that show?

WUHRER: No, actually. We went to the time of the dinosaurs, which was pretty great, so we had the CG for the dinosaurs. As an actor, you can act to a piece of green tape on a C stand in this day and age, or then you’re going to be stuck in British dramas or something. And I’m used to [working with green screen], I’ve done that a lot. We went to some crazy worlds in SLIDERS with aliens and dinosaurs, but a Sharknado, that’s pretty out there.

WUHRER: Well, in EIGHT-LEGGED FREAKS, I had a rifle. I got to be a pretty badass sheriff and build my power out. I’m more of a mom in this one. I mean, I’m the mom in EIGHT-LEGGED FREAKS also, protecting her daughter, but in this one, all the action happens when we’re together, so there’s more of a frenetic energy to it. But I kick some ass in this, a little bit. Also, people are very afraid of sharks. Sharks are something that fascinate people and people are afraid of them, but they want to look at them, they want to study them and see them in their natural environment, their element. EIGHT-LEGGED FREAKS – people are freaked out about spiders and they don’t want to look at them. So that’s why this movie is actually more successful than EIGHT-LEGGED FREAKS, because people are drawn to sharks, whereas with spiders, people are, “Get it off me! Get it off me!” and it’s a much different experience.

AX: How was playing a character who is a mother and also Ian Ziering’s sister?

WUHRER: I play a mom and I am a mom, so you can get these emotions going on the fly. I’ve done so many low-budget movies, if you don’t have that skill honed in, go home. And I’ve known Ian since I was fifteen years old. We just kind of knew each other, and you pick up where you left off. I went a little blonder to play his sister and we just had a lot of down-time and you get a lot of ribbing – well, this one, we didn’t have a lot of down-time.

AX: You do a lot of genre films. Do you enjoy horror/sci-fi?

WUHRER: I love working. I love doing this kind of thing. I’ve thrown all caution to the wind with my career years ago. I don’t care what anybody says. I enjoy working, creating something with people. Typecast me all you want, it’s fine by me.

I also think as actors – and this is true in the first [SHARKNADO] as well as the second one – you have to believe it and you have to keep it real, and you have to ground the movie. You have to give it a little bit of weight so that you care about the characters and you actually do submerse yourself in the story and that’s important. So we couldn’t play it campy, we couldn’t spoof it while we were doing our job. We had to keep it grounded.

AX: Is there anything else you’d like to say about SHARKNADO?

WUHRER: Well, there are no girls in bikinis, I don’t have to take my clothes off, which at my age now, everybody’s grateful for that, and this is a movie that people are going to watch that doesn’t have sex, it doesn’t have a lot of salacious, frisky activity. I think that makes it more of a wholesome project. You also have a human story, so there are characters. It’s about people, it’s about family, so it’s a whole different story as well, not just sharks ripping through flesh.

And I’ve done big monster movies that have had budgets, and this one has a heart. It’s almost like the heart in this movie was our currency, and I think it was more fun. We really all pulled together. There weren’t any divas and we made, I think, another successful SHARKNADO movie.