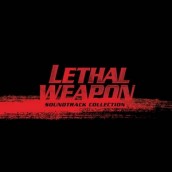 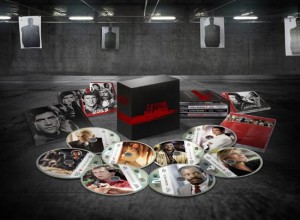 Among the composers who excelled in the legions of distinctly 80s and 90s action films that had tough guy heroes mowing down hordes of American drug dealers and / or Eurotrash villains, Michael Kamen nailed the sound of two cop franchises that were perhaps so popular because their body count heroes weren’t iron jawed hulks. One featured an NYC detective who always happened to be in the wrong place at the wrong time, while the other teamed a seemingly crazy lone wolf LA officer with a partner who was more concerned with his home life. So while Kamen’s brassily orchestral, straight-ahead DIE HARD scores left Bruce Willis to exhibit John McClane’s solo vulnerability, the composer truly got to redefine the tone of buddy cop films with the LETHAL WEAPON  films that preceded his hiding about Nakatomi Plaza with this eleven year run over the course of four movies – bringing a whole new rock and roll / jazz-pop vibe to the genre that mixed symphonic power chords with electric guitars and saxes, conveying equal parts bombastic attitude and bluesy poignancy for four scores that lock into one adrenalin-fueled whole, the scope of which becomes apparent with La La Land Record’s dead-bang box set.

It wasn’t as if offbeat music for buddy cop movies hadn’t existed long before 1987 with Dominic Frontiere’s whimsical jazz in FREEBIE AND THE BEAN or James Horner’s calypso groove for 48 HOURS. But it took Michael Kamen to propel their attitude to gloriously entertaining new heights with LETHAL WEAPON. With a range that had encompassed HIGHLANDER‘s delirious fantasy mayhem as well as the cool suspense of the original TV version of EDGE OF DARKNESS  (not to mention the street cred of starting The New York Rock and Roll Ensemble) Michael Kamen was an interesting, and ideal choice to jump out the window, and up to the propulsive rafters for director Richard Donner. Pretty much the themes that started off the unlikely partnership of officers Martin Riggs and Roger Murtaugh would be the musical bedrock for the cinematic quartet, undiminished in its melodic energy, even as the movies themselves peaked with number two. Abetted by the blues guitar licks of Eric Clapton (whose work for Kamen on DARKNESS) and the sax of David Sanborn,LETHAL WEAPON created a character bond marked with humor, soulfulness and danger, taking Riggs from suicidal thoughts to swaggering confidence, yet never losing the character’s sense of melancholy. These were rock and roll detectives for all of Murtaugh’s declarations that he was getting too old for this shit, an exasperation that accounted for much of these scores’ sly humor, while creeping electronics and a sinister orchestral approach gave genuine threat to the villains. Listening straight up through a few hours of Kamen’s music lets us hear these scores as an extended riff, introducing new, throttling action themes that grow out of what’s come before, while the existing motifs get creative variations that give LETHAL WEAPON a singular, melodic range rare for any series, even when one composer is attached to it. But that doesn’t make each soundtrack essentially the same old stuff. Christmas bells segue to South African percussion, while the sound of brass-hitting, armor-piercing bullets turn to Asian chopsocky over 2, 3 and 4, creating what’s still the best example of readily identifiable action scoring that stands apart from the action arena that Kamen became a reluctant master of.

Having done an impressive job at collecting television series into box sets with the likes of STAR TREK and THE X-FILES, LETHAL WEAPON marks La La Land’s second time at attempting this feat with a major movie series at their FRIDAY THE 13TH compilation. And they don’t disappoint for the price here. Each WEAPON entry is complete on two discs, offering the full score in addition to the original album presentation. And there are some truly nutty surprises to be found within, particularly the crazy cartoon music that Kamen would come up with in LETHAL WEAPON 3 for Leo Getz, who’d become the series’ equivalent to Jar Jar Binks – obnoxiousness that Kamen played as if the character was Bugs Bunny by way of Porky Pig. It’s easily the most absurd music he’d do for any cop film. And where most soundtrack labels would snub the songs, La La Land knows that the tunes are a major attraction to any connoisseur of action scores from the day, not only including the likes of Honeymoon Suites “Lethal Weapon,” George Harrison’s “Still Cruisin’” and Sting’s cool theme-based “It’s Probably Me,” but also Bobby Helms “Jinglebell Rock” that so memorably opened the series for a topless death leap. But probably the big attraction here for diehard LETHAL WEAPON fans is getting the completely unreleased score to the fourth entry, which has Kamen going out with a grooving, Asian bang even after the series itself had long run out of gas. La La Land’s packaging is nicely designed, with Jeff Bond’s liner notes offering an entertaining overview of a series whose music groovily remains in a buddy cop class all its own.

Click on the link to Purchase the LETHAL WEAPON soundtrack collection