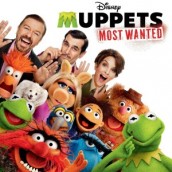 The best kid’s stuff has always has a wisenheimer appeal to adults, bringing on cuteness that the tykes can enjoy, while working on a completely different satirical level that their parents get a chuckle out of. Such is the lovable balance of sweetness and sarcasm that’s made the Muppets endure through innumerable sequels, a hip factor that goes off the scale when you’ve got Flight of the Conchords’ Bret McKenzie re-invigorating a bunch of puppets. MUPPETS MOST WANTED is a singular, happy celebration of self-effacing sarcasm, with songs that are perhaps even more toe-tappingly hilarious and catchy than McKenzie’s first turn on THE MUPPET MOVIE.

After brilliantly taking down franchise-itis with “We’re Doing A Sequel,” the golden throat goes to an evil double of Kermit for a jewel heist plot that recalls THE GREAT MUPPET CAPER. There’s a bouncy, jazzy flair in the repartee between Ricky Gervaise and dark Kermit in “I’m Number One,” while a Russian prison gives a doo-wop welcome to “The Big House.” “I’ll Get You What You Want” dips its webbed feet into adult contemporary with a nearly impossible list of love offerings, while catchy speak-singing brings a hilarious third degree for “Interrogation Song.” Of course celebrity cameos will abound, from a duet between Celine Dion and Miss Piggy in “Something So Right” to Josh Groban operatically performing amidst Muppet chorus and trademarked Kermit banjo on “Together Again.” And even if you’ve thought “Macarena’s” been done to death, leave it to Miss Piggy and the Bayside Boys to put new groove into it. FROZEN  composer Christophe Beck gets into the act with a brief, cheerful medley that bounces between manic French energy and a Russian-style choral danger, all kept within this cheeky realm. MUPPETS MOST WANTED retains a high-spirited, wonderfully sarcastic energy that’s the furthest thing from a felt been-there done-that.

Click on the link to Purchase the MUPPETS MOST WANTED soundtrack