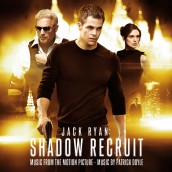 It’s ironic that January will see La La Land’s full re-release of DEAD AGAIN, an operatically orchestral, knowingly old-school Hollywood score (complete with thundering chorus) for a film that put composer Patrick Doyle and actor-filmmaker Kenneth Branagh on the Hollywood map. For like this movie whose MacGuffin was a reincarnation role-reversal between composer and lover, those fans familiar with Doyle back in his symphonic glory days of CARLITO’S WAY, THE LITTLE PRINCESS and INDOCHINE  would never recognize the electronically slicing, percussively smashing composer he’s become today, especially with JACK RYAN: SHADOW RECRUIT. Make no mistake that those thematic, orchestral chops aren’t still there in spades. But they’ve been powerfully reshaped for the sound of Hollywood multiplex spectacles full of cosmic special effects and maximum destruction action scenes, an arena that Doyle transformed his style capably for with PLANET OF THE APES and the Branagh-directed THOR. Now, the team goes even more hard techno-orchestral core as they reboot Tom Clancy’s franchise with smashing results.

Technology has played a major factor in Clancy’s believable thrillers, and the sleek, merciless beats and rhythms of computer programs that spell disaster play a big part in Doyle’s newest directorial collaboration with Branagh. For Doyle’s jolly Scotsman (who was able to get a bit more old school when dealing with his native animated country with Disney’s BRAVE), JACK RYAN is deadly serious musical stuff, digitally hard-edged and gripping. But that doesn’t mean a restrained, emotional orchestra isn’t ready to sink in the duty, honor and sacrifice that drives Ryan, the score becoming more symphonically emotional as the stakes get ramped up. Doyle also does a powerful job of at conveying the sleek, financial threat that Russia has become in the personage of Brannagh’s villainous oligarch, subtly conveying the character’s own sense of nationalism with a balalaika, or a religious sense of purpose with the beautiful Russian choral piece “Faith of our Fathers.” And just as James Horner had to engage in a computer keyboard duel for A CLEAR AND PRESENT DANGER, Doyle keeps the electronic pulse interesting for eight whole minutes of “Stealing the Data.” But when it comes time to get off the keyboard and bring on the explosions and car chases, Doyle delivers the expectedly smashing, percussion-bursting chase music with the kind of thrilling aplomb that would make Jason Bourne break out into an exhilarated sweat – complete with the giddy, techno jam end title we’ve come to expect from CIA super soldiers, even if they’re a bit more down to earth as Jack Ryan.

The fact that you’d think JACK RYAN‘s composer was a young techno-geek Turk with a studio full of gear and a knack for combining them with orchestral energy says much about how Patrick Doyle has re-invented himself for the Hollywood blockbuster business that’s killed most of his peers’ careers deader than a KGB assassin. Like the hero of Tom Clancy’s franchise, there’s no stopping the different personages that Doyle can assume, especially in the continued company of his greatest collaborator over the course of numerous, ever-escalating films.

Click on the link to Purchase the JACK RYAN: SHADOW RECRUIT soundtrack