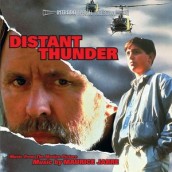 Old-school Maurice Jarre admirers might have blanched when the composer mostly left behind the orchestra that he’d made his Hollywood name on with the likes of DR. ZHIVAGO to engage in electronic pursuits during the 80s and 90s. Yet his synth explorations yielded some of the composer’s most interesting, and innovative work with the likes of DREAMSCAPE, JULIA AND JULIA and THE MOSQUITO COAST, not to mention Oscar nominations for  WITNESS and GHOST. Now Intrada goes deep into the Vietnam-haunted Canadian woods to discover a near-unknown, computer-fashioned Jarre score with 1988s DISTANT THUNDER, an equally unsung film that brought together the unusual pairing of John Lithgow and Ralph Macchio, playing a psychologically ravaged veteran, who comes into contact with the grown son he deserted back in the day. THUNDER is once again proof to Jarre’s synth detractors of how he used then state of the art sounds not as a way to fiddle about with technology, but as a way to find new emotional ways of expressing his characters. And given this shell-shocked hero, Jarre’s music both mines a sense of loss, and the growing hope in a bond renewed. Beginning with spectral voices and a descending melody, Jarre creates a sense of isolation and vulnerability, a tone that makes the space-lost comrades of ENEMY MINE into THUNDER‘s closest relative from this stylistic cannon.

Like his film scoring compatriots Jerry Goldsmith and John Barry who were exploring synth scores at the time, Jarre had a distinctive vibe for his electronic orchestra, emulations that truly show their range in conveying the nearly insane recesses of battle-scarred minds, and the warmer, poignant sound of humanity trying to find their way out, with insane percussion getting its work out for the war game that concludes DISTANT THUNDER, while a bright wash of percussion signals redemption. Both experimental and accessible, it’s a score that uses technology in an emotionally resonant ways, with a sense of discovery that marks Jarre as a composer who always sought to expand his boundaries through whatever musical means were necessary. The album’s excellent liner notes by Tim Grieving feature new interviews with Jarre synthesists Michael Boddicker and Nyle Steiner, understandably relating how Jarre created his offbeat sound. Now if only someone would put out his SOLARBABIES on that note.

Click on the link to Purchase the DISTANT THUNDER soundtrack