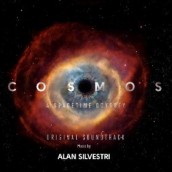 Few composers have conjectured about weird science with Alan Silvestri’s sense of cosmic wonder, whether it’s been seeking alien life inhabiting our inner space in THE ABYSS, time travelling BACK TO THE FUTURE or talking with an intergalactic craft voiced by Pee-Wee Herman for FLIGHT OF THE NAVIGATOR. So it’s only natural that Silvestri now gets to board a spaceship of the imagination first piloted on TV 24 years ago by Carl Sagan, whose film adaptation of CONTACT ranks as one of the composer’s most awe-inspiring scores. It’s that music’s touching quality of intergalactic hope that now infuses COSMOS’ pretty terrific reboot, which places Sagan’s acolyte Neil deGrasse Tyson aboard a significantly souped-up spaceship OTM, whose new model’s cinematic aspirations are achieved by Silvestri’s music at all of its symphonically sweeping, big screen sci-fact majesty.

For the original COSMOS, Sagan innovatively chose such artists as Vangelis, Vivaldi and Goro Yamaguchi, a mix tape that mirrored the recordings for an album that’s still spinning somewhere in the great unknown with Voyager. Truly scoring this COSMOS is the right decision, especially given a composer of Alan Silvestri’s caliber. Sure “nature” documentaries have had lavish orchestral scores done for them, though most seem to have come from BBC’s shores. So even more astonishing than having COSMOS appear on the inquisition thinking Fox network is hearing Tyson take off with all the power, and grace of CONTACT (let alone carrying aboard the touching innocence of Silvestri’s Oscar-nominated FORREST GUMP). It’s that measure of the commitment on every creative count here that makes COSMOS new again. Given that the rapidly switching factoids of these documentaries are likely even more hard to hit than scoring a movie, it’s truly amazing how well Silvestri captures the narration-driven COSMOS in a melodically seamless way that hits all of its salient facts and imagery. It’s music that gives us the feeling of a budding, adolescent scientist as he’s filled with the imagination that will change his life, much like we can imagine a youthful Tysons’ career path being guided as he read, and watched Sagan’s revelatory work. It’s a universe alive with gee-whiz enchantment, as well as danger, as a rapturous, orchestra powers through nebulas and strands of DNA, along with Silvestri’s distinctive use of electronic percussion.

As always, there’s nothing better than bell-percussion to signal that stargazing kid within all of us, or the composer’s love of deep brass to become a big bang. With COSMOS seemingly walking a fine Fox line so as not to inflame Rupert’s right-wing religious core audience, there’s certainly a gossamer, spiritual quality to the soundtrack as well, whether it’s heard through a heavenly chorus or a poignant violin. But in the end, it’s Silvestri’s noble, thematic ability to make COSMOS as enthrallingly dramatic as Jodie Foster’s quest for alien life, let alone Michael J. Fox’s quantum-spanning efforts to retrieve a sports almanac, that make for a touching, emotionally-powered sound that make us forget we’re watching, or listening to a TV show as Silvestri’s transports us to the biggest screen of all.

The musical future might be digital, but here’s hoping some of Silvestri’s finest work will be landing on hard copy. And given how each episode gets treated with the power of a film score, there are plenty of more musical stars yet to be explored for future COSMOS soundtrack editions.