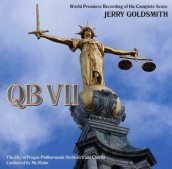 Back in the day, television movies-cum-miniseries weren’t just films for free. They were often multi-night events that tried to rival the big screen for its epic, star-filled scope and serious subject matter, hiring top-flight Hollywood composers and affording them the cinematic resources and creativity to rival their widescreen work. One particular musician who benefitted from the networks’ most prestigious offerings was Jerry Goldsmith, who’d started out with series like DR. KILDARE and THE TWILIGHT ZONE before taking home Emmy wins for THE RED PONY, BABE and MASADA. But it was arguably 1974s QB VII that gave Goldsmith his most stirring accolade, with ABC’s two night, three-decade spanning miniseries (the first of its kind on American television) that dealt with a libel suit made by a concentration camp doctor, a tale that travels from Germany’s Holocaust to an English courtroom. Now Goldsmith’s Emmy winning music sounds mightier than ever before as producer James Fitzpatrick conductor Nic Raine and The City of Prague Philharmonic Orchestra and Chorus proves beyond a doubt their excellence at re-recording classic scores for soundtracks of any medium.

Based on an autobiographical best seller by EXODUS author Leon Ursis about his legal battle with an Auschwitz “doctor, QB VII (its name taken from the case’s court location) was a way for Goldsmith to musically get in touch with his own Hebraic roots, let alone a magnificent opportunity to write a moving elegy for his compatriots who died at Nazi hands – including those who somehow survived their “medical” treatment at this physician’s reluctant hands. Ethnic, somber music for violin, cimbalom and accordion convey the crushing weight of the Jews’ suffering through one of history’s greatest injustices, with a chorus offering a “Kaddish for the Six Million,” Rarely has the composer’s music had such a feeling of reverence, delivering the kind of heartfelt passion that went beyond his ability of delivering routine excellence for just about every assignment. QB VII offers a virtual cornucopia of what made Goldsmith great – the staccato energy of his brassy action writing, stirring string nobility, militaristic forcefulness and above all, a religious devotion to melody. While recalling such scores as PAPILLON and PATTON one can also hear the seeds of great scores to come in QB VII, from the sweeping Arabic exotica of THE WIND AND THE LION to the repeated, echoing rhythms of ALIEN and the dark chorus of THE OMEN. Those latter two were horror classics in the making, but here Goldsmith is dealing with man at his most evil, or culpably clueless, while also playing a Semantic people’s soulful ability to rise above any evil.

Goldsmith fans knew that QB VII was a great score given Intrada’s CD release of the original vinyl album from a few years back. But the massive, stylistic scope heard on the Prometheus album is a true revelation across over 90 minutes on two discs, making QB VII one of Goldsmith’s top masterworks – not to mention one of his best-sounding. The credit goes to Fitzpatrick’s team, who’ve done lavishly resonant work with such hallmark scores as Dmitri Tiomkin’s THE ALAMO and Miklos Rozsa’s QUO VADIS, not to mention Jerry Goldsmith’s great score for the less-than-classic THE SALAMANDER. Where re-performances of this sort were once things to be dreaded with spotty playing and bad microphone placement that was particularly endemic to Eastern Europe, spectacularly vibrant renditions like QB VII are ushering in a brave new world of giving yesteryear’s soundtracks the kind of vibrancy that make it seem like you’re listening to the original scoring session that went down yesterday on a Hollywood studio lot, as opposed to the glorious city of Prague. It’s now a place that now knows how to play the film and TV classics like no one’s business.

Click on the link to Purchase the QB VII soundtrack