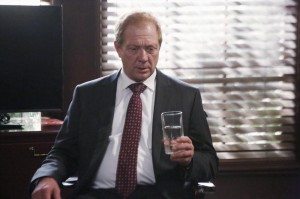 ABC’s SCANDAL, which has its third-season finale Thursday April 17 at 10 PM, is famous for its plot twists. Knowing series creator Shonda Rhimes, the episode will be a cliff-hanger that leaves everyone in some kind of peril.

White House Chief of Staff Cyrus Beene, played by Jeff Perry, has already been through plenty this season, what with losing his husband (James Bucatinsky) to murder, losing the trust of President Grant (Tony Goldwyn) and almost losing his mind.

Perry, a veteran actor from Illinois, previously played a recurring role for Rhimes on GREY’S ANATOMY and was a series regular on NASH BRIDGES. Like everybody else on SCANDAL, he is sworn to secrecy about where the storyline may go, but at a party thrown by ABC for the Television Critics Association, Perry divulges what he can.

AX: You played the Vice-President of the United States on PRISON BREAK, and now you’re the President’s Chief of Staff on SCANDAL. Do you see any similarities between the characters?

JEFF PERRY: You know, what I did on PRISON BREAK was really subordinate to his circumstances, his being captive and being under house arrest and all of that. In this, he has much more day to day political function in the job. So in that way, they’re really different.

AX: Have you based Cyrus at all on any political figures from real life?

PERRY: I’m pretty sure it came from [ABC executive] Paul Lee’s office, a very sort of simple but lovely note for an actor. I did one audition and I got the response of, “Less lovely professor, please, and more Rahm Emmanuel.” And so I started watching what I could publicly of Rahm and Judy [Smith, the real-life political troubleshooter who is the basis for Kerry Washington’s character Olivia Pope] helped me meet Sam Skinner, former [White House] Chief of Staff, and I just started trying to devour stuff and started to composite.

AX: A lot of Cyrus’ emotional investment is with Fitz, the President. How is it working opposite Tony Goldwyn?

PERRY: We never got to meet [prior to SCANDAL], but I really admired his work for a long time, and I remember maybe the WALK ON THE MOON era as – the directing part of Tony’s life, I remember writing a love letter, because the work was gorgeous. So it was great to meet, and we have friends in common. And like Kerry was saying, because the work is an actor gift, we were so grateful for this opportunity.

AX: In real life, you’re married to a casting director, Linda Lowy. Have you learned anything from your spouse that’s helpful to you in your work?

PERRY: Oh, yeah. Just soaking up the other person’s brain and their sensibility and reading stuff for each other, for sure.

AX: Did you know when you were first cast in SCANDAL that Cyrus would be so morally ambiguous, arguably sometimes villainous?

PERRY: No, no. I thought for about two episodes, “I think I’m kind of the moral center of this.” [laughs] And then with great rapidity, it was like, “No, you might be Iago, or Richard the Third, but moral center has gone by the wayside.”

AX: Do you think Cyrus means what he says on some level when he’s lying?

PERRY: I’m trying to think to what extent I’m Machiavellian or strategic. It’s a very organically, strategic, calculating job. But I would say at the same time, he believes it as he’s saying it [laughs]. There’s conscious “information is power.”

AX: Did you expect SCANDAL to become so arced, with all of the stories interwoven, rather than being standalone?

PERRY: I guess that revealed itself pretty quick. Knowing Shonda’s GREY’S ANATOMY and PRIVATE PRACTICE writing, I was thrilled and a half when I read the pilot and I said, “Okay, this is the political thriller that has kind of the novelistic structure of a bunch of stories going on at the same time. She’s going to be great at this. I think she loves this.” And so that kind of revealed itself early, the structure of it. But what kills us is that they’re such professional surprisers as a writing staff. And [in Season 2] it felt like, “You guys have probably shot your wad, right? There can’t be any more surprises that have any credibility.” And they kind of keep cooking ‘em up. So it’s a thrill.

AX: Can you talk about how the SCANDAL cast and staff became so active on Twitter?

PERRY: Shonda, I assume, from GREY’S ANATOMY life and PRIVATE PRACTICE life and just going from her early thirties to early forties in television, in her own evolution, she just saw that this is a crazy, great tool to connect with the audience. Kerry was very involved in both Barack Obama’s campaigns and I think she felt on that level, and maybe as well as career, that this was growing into an amazing tool to reach people, to connect people. So they took me from the rotary phone to Tweeting, and you can imagine my disorientation [laughs]. But the more we did it, the more it worked and the more we enjoyed it, and it seemed like the more the audience enjoyed it. Josh [Malina] is gigantic on it; he lives on social media; he’s an incredibly smart, funny, dark writer and so yeah, he’s one of our Twitter heroes.

AX: Do you think that Kerry Washington’s Emmy nomination did something for you guys, and if so, what, or do you think the fandom is so strong it doesn’t matter either way?

PERRY: I think people love the awards shows. It’s a very natural way to publicize and a very natural way to honor an accomplishment, so yeah. We all know – the Tonys, the Oscars, the Emmys, the Grammys – these are events that people who love these different art forms, they just love them. So of course it’s going to help. And Dan Bucatinsky’s nomination for Best Guest Actor in a Drama. So both beautiful and well-deserved honors. So yeah, that helps a lot. And I kind of hope that some people are infecting others and going, “You’ve got to check this show out, check it out, see if you like it. If you like it, you’ll be addicted.” Word of mouth is always great. I grew up doing theatre and it’s kind of the most reliable and steadfast kind of fandom. Other things can be built for awhile by the media saying, “This is how you should feel,” but honestly, somebody talking to their family member or their neighbor or this or that or the people they work with and saying, “I’m loving this,” it’s the strongest messenger, right?

PERRY: Tom Verica, supervising director of SCANDAL, and a guest artist on both GREY’S ANATOMY and SCANDAL and maybe PRIVATE PRACTICE as well, a wonderful actor named Colin Douglas and myself, we’re all trying to get this small independent film up called BUILDING BRIDGES and Oliver Bokelberg, our director of photography, will be its director of photography, and we’re going to try to do that next hiatus somewhere in Illinois.

AX: Anything else you would like to say about SCANDAL right now?

PERRY: I would reiterate what Kerry was saying. You sometimes feel like you are muscling work [not SCANDAL] that’s maybe a dimension and a half. And this consistently feels like we have to reach for our best work to try to get close to what Shonda’s conceived.