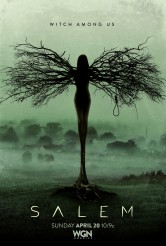 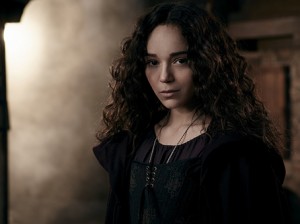 SALEM, WGN America’s first scripted dramatic series, airing Sundays at 10 PM, deals with the suspicions of witchcraft in that colony during the late seventeenth century. In series creators Adam Simon and Brannon Braga’s version of events, witches are real, very scary – and have a gift for framing other people for their sometimes bloody deeds.

Some of the characters are invented, but some, like Ashley Madekwe’s Tituba, are people documented in history. Tituba was a slave who was tried for witchcraft, though there are conflicting opinions on her ethnicity and nationality. In Arthur Miller’s play THE CRUCIBLE, Tituba unwittingly triggers the anti-witchcraft hysteria; in SALEM, she is in league with seemingly proper Puritan matron Mary Sibley (played by Janet Montgomery), who is in fact a coven leader.

Madekwe, a Londonnative, spent two seasons on ABC’s REVENGE as Ashley Davenport. Some of the actress’ other credits include Woody Allen’s feature film CASSANDRA’S DREAM and the U.K. series PRIME SUSPECT and WALLANDER.

ASSIGNMENT X: Is Tituba your first role as a witch?

ASHLEY MADEKWE: Yes, this is my first witch.

AX: Did you ever think you’d like to play a witch?

MADEKWE: I’m a huge HARRY POTTER fan, I have to admit, but I actually was aware of Tituba from an early age. I read THE CRUCIBLE when I was at school, saw THE CRUCIBLE, the film [starring] Daniel Day-Lewis, saw it when I was at drama school. I’ve always thought I’d love to play Tituba. So now I am going to play her – my own version of her.

AX: Are there different types of witches on SALEM?

MADEKWE: Yes. There are other supernatural beings, and there definitely are men who are witches as well.

AX: How would you describe the writing on SALEM?

MADEKWE: It jumps off the page. It’s immediately really creepy in the script, but the emotional depth is all there.

AX: How about the costumes?

MADEKWE: I will certainly never complain about being dressed up ever again. I think I would take a ball gown over a corset any day of the week. The corsets are brutal.

AX: You actually write a fashion blog. Is your interest in fashion tied in any way to your work as an actress, or are those two completely separate passions?

MADEKWE: I don’t think you can tie them together. They’re separate passions. I like fashion and I like acting, but they don’t really meet in the middle. For me, fashion’s just a personal style thing. Some people care about the way they look, and some people don’t. If people don’t, that’s fine, that’s great. I do and I think lots of women do. It’s a pride thing. Women take pride in the way they look. I think fashion is an art. I really respect designers and what they do. I would never try to be one myself; I’m not someone who sees myself doing my own fashion any time soon. I just love the fashion world and I like being able to be in it to the degree that I am. Acting is my passion. It’s my job and it’s been my job since I was a child. I can’t see myself doing anything else.

AX: You had said you got to have some input into your costumes on REVENGE …

MADEKWE: [REVENGE costume designer Jill [M. Ohansson] and I have a really good relationship. She is one of the most generous costume designers I’ve ever worked with. She’s so patient and she’s not over-territorial at all. She doesn’t slap ownership on the characters, so we created what we wanted Ashley to look like together. In Season 1, there were some weeks where I literally had only one scene, but we’d still always have a costume fitting together, because I just really enjoyed the process of creating a character from the clothes in, and with Jill and I, we’d go through the racks together, we’d decide on the looks for each scene together, and then that look [was] put in my room in the morning, and all my shoes and my accessories laid out, so I [got] to do the final styling.

AX: Your name is Ashley and your REVENGE character was named Ashley. Was she named after you?

MADEKWE: Yes, they did. When [REVENGE creator] Mike [Kelley] was creating the role of Ashley, he created her with me in mind. I worked on a show with him called THE BEAUTIFUL LIFE back in 2009 inNew York, and we got on really well. I still completely came in and read, because Mike was the only person who knew me, so I read with Mike, and Marty [Bowen], our executive producer, was there, and then I got the part. Mike had an idea of who he would like to play the part when he was writing it, and as a treat to me, he also called her Ashley, which is a deeply flattering thing. But she’s not based on me at all.

AX: Back to SALEM, it looks like a lot of the characters get covered in muck at various points in the story. Do you have to deal with that?

MADEKWE: I actually don’t get down in the dirt. They know better than to get me dirty.

AX: When the writers don’t tell you everything that’s going to happen to your character, does it help keep you on your toes, or have you ever thought, “Wow, I wish I knew she was going to go in that direction?”

MADEKWE: I think it does help keep you on your toes, and if you know your character well enough, they can go anywhere and you should be able to take them anywhere. Just like in life. People can do anything at any time. You never know what someone’s going to do

AX: You weren’t on REVENGE this season. Do you think you might go back?