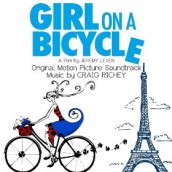 After using a groovily offbeat acoustical approach for to play the tangled LA relationships of LOVELY & AMAZING and FRIENDS WITH MONEY, American composer Craig Richey takes a trip to Paris for a more universally symphonic comedy sound for GIRL ON A BICYCLE, as an Italian tour bus driver with a sex-starved German fiancée finds himself falling for a winsome French bicyclist who passes by his route. While he wittily captures its characters’ nationalities with an accordion and mandolin, this enjoyably sweet is mostly about using lushly melodic strings for the kind of perky Francophile enchantment practiced by Alexandre Desplat in JULIE & JULIA.

Driven by a theme that promises sweet entanglements to come, Richey’s embodies a bicycle as driven by Venus herself, full of peddling, uptempo rhythm, bell-ringing percussion and effortlessly gliding melody that knows just how to hit its sneaky, jokey bumps in the right fashion, while also playing some hurt hearts. Not only does this GIRL carry such pleasant passengers as whistling and Swingle Singers vocalese, but also some catchy songs that comment Greek chorus style on the continental entanglements at handlebar hand. Richey is sweetly hands on with this string-driven school of comedy as much as he might be with a folksy guitar back home, peddling about with a bright enthusiasm that makes his GIRL a real international charmer.

Article Source: Assignment X
Article:CD Review of  the GIRL ON A BICYCLE soundtrack