Interview: Kiefer Sutherland in 24: LIVE ANOTHER DAY is back as Jack 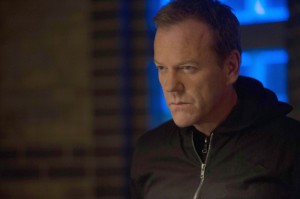 If at this point you don’t understand the impact of Kiefer Sutherland returning as Jack Bauer in 24: LIVE ANOTHER DAY, there may be no explaining it to you.

This is the first time Sutherland has played Jack since the eight-season run of 24 ended in 2010. The new twelve-episode series, which begins its run on Fox in a two-hour block beginning ronight, finds Jack hiding out in London, where he soon finds that the fate of much of the world is in his hands.

Sutherland is at a party thrown by Fox for the Television Critics Association at Pasadena’s Langham Hotel. Earlier in the day, there’s been a Q&A panel for 24: LIVE ANOTHER DAY, but happily, Sutherland isn’t all talked out. This article is a combination of quotes from both the session and the party.

ASSIGNMENT X: 24: LIVE ANOTHER DAY takes place in London. What will we see of the city?

KIEFER SUTHERLAND: Iconic places, and it’s also not one episode. This is twelve episodes, and you will certainly feelLondon, and hopefully more than that.

SUTHERLAND: Well, I was born there and spent huge parts of my life there. It’s a place where I feel very comfortable …London has some landmarks that are unbelievably significant – [there are shots with] the Tower of London in the background. I also think this is a huge opportunity from a storytelling point of view. Through almost every season, we have followed as a back story the President of the United States. In this twelve-hour arc, we’ll be following the President of the United States [played by William Devane] and the Prime Minister of England, which will be a very interesting look into how those deals [are done] or how we perceive those deals to be done. Many times, what we perceive as some kind of treaty is involving things that we know nothing about. We’re examining that in the course of the show. So from every perspective, from visual to storytelling, it broadens the scope of the show. So, for those reasons, I’m very, very excited 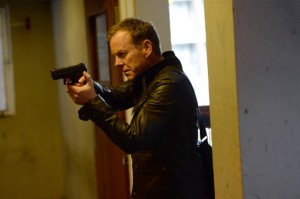 AX: Will we see the Thames? Would you be up for Jack taking a tumble into the river?

SUTHERLAND: It depends what area. It’s not a safe area. It’s like saying, “Would you be up for tumbling into the Hudson?” There are guys that swim the Hudson to the islands. It depends on what track, it depends on where the sewage is coming from and everything else. I’m not stupid [laughs] and there’s a lot of ways we can do that.

AX: How do you feel about returning to playing Jack Bauer after four years away from him?

SUTHERLAND: I’m really excited. But I’m also nervous. We’ve had such an unbelievable response and support from the fans of our show over the course of the nine years and the eight seasons that we did. There’s never been a season that I thought was perfect – neither did the writers or anybody else involved in making the show. This is an opportunity for us to try again to make a perfect season. I don’t know if that’s possible, but we’re going to try really hard and we have a great responsibility to the show and to our fans, and so I’m I think appropriately nervous and anxious.

AX: Was there something that you wanted Jack Bauer to do before that you’re getting to do this time around?

SUTHERLAND: There’s not something that I missed getting to do in the course of the show when we were making it. One of the things that I think is interesting, though, about this year is that Jack Bauer’s been estranged from his country, from his family, from any semblance of friends or social life for four years, he’s been hiding in Eastern Europe for four years. I can tell you he does not believe that he did anything wrong. They were circumstances that needed to be dealt with – I think the audience felt the same way, but politics have played a part in his life that has stopped him from being able to even articulate his point of view without being killed. So by the time you see him reenter this season, he’s so angry that even relationships like Chloe [Mary Lynn Rajskub], there are people that he doesn’t trust. He doesn’t trust anybody and he’s mad. And it will take those old, historic relationships like Chloe to pull him back. Normally, we’ve started an [season] where the character has a glimmer of hope and then those hopes are dashed and he begins the season. This year, we’re going kind of inverted, where he’s coming in really hot and we’ll see. Hopefully, some of those characters can pull him back.

AX: How long has it been since Jack has been able to see his granddaughter? How does he feel about it?

SUTHERLAND: It’s been about five [years] now. It makes him very angry. I think he’s very resentful about the situation that he’s been in for what he feels he did. And so that’s what I was just saying, is that he comes in at the top of the season very hot.

AX: How is it working again with Mary Lynn Rajskub, who plays Jack’s most loyal supporter Chloe?

SUTHERLAND: I think there’s a great impetus for all of us to create something new with the show and we’ve done that with a lot of new characters, certainly within the context of the storylines and the political issues that Jack Bauer and all of the other characters are dealing with. That’s all very fresh. And Chloe and Jack have had a relationship over the entire span of the show and they have been allies. At the very beginning of this [season], they’re actually pitted against each other by virtue of a set of circumstances. So that is a dynamic that Mary Lynn and I get to play, and that’s very exciting. It’s also something that Mary Lynn and I get to play that’s very exciting. It’s also something that’s going to evolve over the course of the show. Any time an actor gets to play something as complex as a past loyalty that is potentially going to be betrayed, that’s a lot of meat. So it’s a great opportunity for us, and so a lot of the dynamics of the characters that are coming back have been shifted by virtue of the circumstances with which we start the show.

AX: William Devane is back as James Heller, who has been elevated to U.S. President by the time of 24: LIVE ANOTHER DAY. Can you talk at all about this development?

SUTHERLAND: Well, I think [Jack and Heller] ended in deep conflict [at the time of their last confrontation]. I held him responsible for the situation I was in, and for his daughter’s situation as well, and he held me responsible for the same. As I remember it, I had a gun pointed at his head, and instead of backing down, he came towards me with an argument back, and he made a very great argument, and it was beautifully written, and it forced Jack Bauer to say goodbye and kiss her goodbye and leave. So in the beginning of our story, he has great respect for him as a man. He also knows that there’s nothing he can do, even saving his life, that would ingratiate him – Jack Bauer – to him again. That’s done. So it creates an interesting dichotomy. So to have him in this story is fantastic.

AX: There has been a lot of discussion about a 24 movie, even before the series went off the air. Is 24: LIVE ANOTHER DAY based on a 24 film script?

SUTHERLAND: No, the script for the film is very, very different. And the film is an ongoing kind of situation. There’s always an opportunity to do that. But literally, Howard [Gordon, who was an executive producer/show runner on 24] came up with an idea for a twelve-episode run at this, and it was the opportunity that presented itself to us first. It was a fantastic idea, and it’s something that we’re very excited about doing and it’s something that we’re really primarily focused on. So if this ends up rebooting the show or causing a film to be made, so be it. But right now, we’re very passionately focused on these twelve episodes.

AX: Is Jack still able to do everything he used to be able to do?

SUTHERLAND: [laughs] I sure hope so.