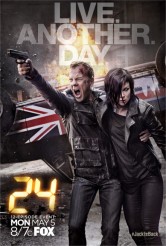 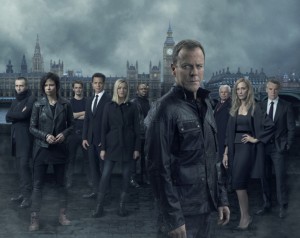 Very few TV series warrant a return to television, especially after being off the air for only four years, but 24 is the exception to the rule. It’s a series that broke the television model with its innovative format (a real time story told in 24 episodes) and it went out when the producers wanted to take it out, not because the audience lost interest or the ratings were in the dumper.

And the franchise’s main character Jack Bauer (Kiefer Sutherland) proved to be one of television’s greatest misunderstood heroes and it looked as if he might get his own theatrical movie franchise. That never manifested for various reasons, so now we have a limited series event 24: LIVE ANOTHER DAY – a 12 episode arc that brings us up to date as to where Bauer’s been and what’s next.

In this case, after becoming a United States fugitive disappearing off the grid concluding the series run with Season 8, he’s located in London where he allows himself to be captured only to save his long-time right hand girl Friday Chloe (Mary Lynn Rajskub) from being tortured by the CIA.

Chloe has become a fugitive as well – using her computer skills to release classified information to the world. Even though Jack has no friends (or says he doesn’t), he has to save her (but there are always ulterior motives with Jack).

However, there are bigger issues at hand too – namely, Bauer believes President Heller (William DeVane) is in danger and so is his daughter Audrey (Kim Raver) who used to be his girlfriend before she went insane (among other things). The President is in London on business, but an assassination attempt looms.

Meanwhile, the CIA offices introduces Kate Burton (Yvonne Strahovski) who is shaping up to be the female equivalent of Jack – she has a gut instinct for figuring things out, breaking the rules and even though she has her own troubled past, she’s clearly going to be a problem for Bauer.

The special two hour premiere features just about every single hallmark of the 24 series, but more importantly it does what 24 does best – it reboots itself with exciting new characters a fast paced plot and keeping it revolved around our two most important characters – Jack and Chloe.

Executive producer Howard Gordon has got the band back together – and that means the core group of executive producer / writer all-stars that made 24 so great including Manny Coto, Robert Cochran, Evan Katz, David Fury and of course director Jon Cassar.

While you had to give 24 the benefit of the doubt as its various seasons wore on, it still provided some of the best action and storytelling in the history of television. It never ceased to amaze how often it pushed Bauer to the brink – and made him a villain to the rest of the world and a hero to those who knew what a hero he really was.

24: LIVE ANOTHER DAY feels like the series never went off the air and it’s a good thing. I’s an action-packed two hour episode that brings back Jack to the medium where he belongs. Even though 12 hours is way too little time to spend back in this world, you can’t complain when the series is that good out of the gate with its two-hour return.

If you’re a fan of 24, you’ll love LIVE ANOTHER DAY. If you’re not a fan, you’re still going to find a lot to love without knowing too much about its past. The series always rebooted every year anyway and this is no different, and I’m thrilled that 24 is back and it’s just as exhilarating as ever.