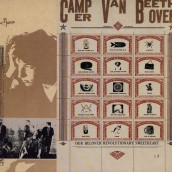 Prior to these two discs (there’s also a special vinyl reissue as well), Camper Van Beethoven was a quirky Santa Cruz, California band that melded rock, ska, country and other quirky attributes that made them indie Gods. Songs like “Take the Skinheads Bowling” and “Where the Hell is Bill” are still classics to this day and all of their albums have gained cult-like status with each new generation.

Things could have gone downhill with a major label hook-up for the group. It’s never boded well for bands who don’t know how to handle the extra dough,  studio time and label pressure, but Camper Van’s Lowery used this as the impetus for creating two exceptional albums that while still alternative, were  not the slam dunk commercial releases the label probably hoped for.

1987’s OUR BELOVED REVOLUTIONARY SWEETHEART (also featuring Jonathan Segel, Victor Krummencher, Chris Pederson and Greg Lisher) is the crown jewel of the two – an album that still reveals new layers some 25 years later. Its lead of tracks “Eye of Fatima (Pt. 1 and 2)” are so odd, strange and addictive, you can’t resist its power.

This album was my first introduction to the band back in the 1980s, and I still get a giddy feeling putting this album on. It’s rare for something to still sound this good, but it does and the re-release certainly cements its reputation as an indie band retaining its power in the face of corporate mediocrity.

The rest of the album continues to mix its guitars and fiddles in a unique way. “She Divines Water” is another stand-out track that feels folky yet altogether indie at the same time. For every mainstream-esque song like this or “Never Go Back,” the album has a darker, more foreboding track like “O Death”, “Devil Song” or “Tania.” It’s as if a group of gypsies landed in the studio and took over the sessions while the band kept on playing.

With an album fully remastered and sounding so much better than the previous Virgin releases, this is a must for anyone familiar with Camper Van or even Lowery’s aforementioned post-CVB band Cracker.

There are 11 bonus tracks included, as well as some live tracks and quirky B-sides. One of more interesting bonus tracks is the radio edit smashing the two singular “Eye of Fatima” tracks into one complete song. The band covers the Buzzcocks track “Harmony in my Head” in typical Camper Van style and one of the live tracks is the adult contemporary Paul Simon classic “Kodachrome” which has been given a bit of indie spit and polish which gives it an almost surf-guitar reinvention.

KEY LIME PIE followed in 1989 and served as the last gasp for the band before Lowery formed the more rockin’ Cracker. Violinist and founding member Segel left by this time though Morgan Fichter replaced him on violins.

KEY LIME is sounds even less commercial than SWEETHEART in many ways even though it was surprisingly their most commercial record netting a surprise hit with their cover of the Status Quo song “Pictures of Matchstick Men”.

Yet for some of its inaccessibility, there is a more consistency to this release. There’s more swirling rock guitars throughout as the album’s “Jack Ruby” ushers in a sonic bombast that elevated everything the band had done prior.

It’s crowning achievement on the disc though is the exceptional “(I Was Born in a) Laundromat)” which kept the band’s trademark wit, but also fully committed to mainstream acceptance without losing their edge.

Of the nine bonus tracks on this reissue, there’s a fascinating “Edit” of “Laundromat” no doubt designed for radio play which cleans up the sound even more. It’s sounds more 1980s with its processed sound than anything else on KEY LIME PIE and shows how labels will do whatever it takes to tweak a band’s sound to give it more radio playability. There’s nothing wrong with the track in it’s “edit” form, but it’s fascinating to have both tracks side by side to see how different a singular song (and band) can sound.

Another standout track is “All Her Favorite Fruit”, showcasing Lowery’s more sentimental side. Excellent track and deserves even more love now that the attention is back on the band with this release.

Live Tracks populate most of the bonus tracks, though there’s the fun acoustic demo “I Don’t Want to Go (To The Lincoln Shrine)” that closes out the release.

As the Lowery has distanced themselves from his Virgin Records years, Omnivore thankfully has full support of the Lowery and his band members which includes extensive liner notes and photos from the era. The tracks on these discs showcase the resiliency of the band as well. Lowery now tours simultaneously with both a reformed Camper Van Beethoven and Cracker on many occasions. It’s a reminder of how multi-talented he is and how he meshes so well with different musical accomplices.

As some of the unsung 1980s alternative gods continue to get even bigger mainstream due (Pixies, for one now has a cover of “Gigantic” on an Apple commercial of all things), it’s about time Camper Van Beethoven was given the full court reissue treatment. These two discs are a step in the right direction and surprisingly are better than any other album released so far this year.

Pick them up. Soak them in. You won’t be disappointed.