How To Train Your Dragon 2 review 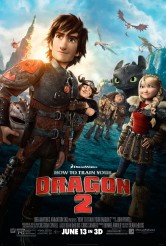 ©2014 DreamWorks
HOW TO TRAIN YOUR DRAGON 2 movie poster
Reviews

Movie Review: HOW TO TRAIN YOUR DRAGON 2

In 2010, HOW TO TRAIN YOUR DRAGON came to the screen. Jointly written and directed by Dean DeBlois and Chris Sanders, based on Cressida Cowell’s series of novels, the first TRAIN introduced us to our hero and narrator, the Viking youth Hiccup (voiced by Jay Baruchel). Hiccup is more of an inventor and explorer than a warrior, much to the chagrin of his father, Berk village chieftain Stoick the Vast (voiced by Gerard Butler). However, Hiccup’s friendship with a young Night Fury dragon Hiccup names Toothless winds up with a very positive outcome. Peace breaks out between the humans of Berk and the dragons that have previously wrought havoc. Stoick is very pleased with his son, the Berk residents become dragon riders and the dragons have a nice new mountain home.

In the new HOW TO TRAIN YOUR DRAGON 2, DeBlois is flying solo this time as writer and director (Sanders remains on hand as an executive producer), it’s five years later in the story. Berk has now transformed itself into an entirely dragon-friendly environment, with flying games involving sheep (we feel sorry for the sheep, though they don’t get eaten, only tossed), stables and a state of medieval art fire suppression system all over the village for those inevitable accidents.

Stoick is so proud of Hiccup that he plans to announce the young man as his successor as village chieftain. Hiccup doesn’t believe he’s suited to this job, preferring to continue flying on Hiccup and mapping new (to the Berks) lands. On one of these flights, Hiccup encounters a band of men who ensnare dragons for the dreaded Drago Bludvist (voiced by Djimon Hounsou). Drago is building a dragon army to do his bidding. Appalled, Hiccup wants to stop Drago from enslaving more dragons, but hopes to accomplish this peacefully, something Stoick thinks is impossible.

DRAGON 2 doesn’t go exactly where we might imagine in this regard. A lot of thought has clearly been put into its message, which is basically – here is the spoiler alert for non-parents who don’t need to approach such things with caution – that there just is no reasoning with some people. This is rather novel for a family film, in that pacifism is actually discussed and then proven ineffective. Most children’s films either go straight for good guy/bad guy or, if the subject of conflict resolution is raised, come down on the side of reconciliation. This aspect of DRAGON 2 certainly adds high stakes to the action and the drama, but for viewers bringing little ones with them who have a tendency to fight first and empathize later, it may at least be something to talk about after the movie.

DRAGON 2 is visually beautiful. As in the first film, one of the strengths here is the you-are-there flight sequences, in which we feel that we’re soaring and diving along with the characters. The addition of many new dragons adds a wonderful color palette, the sight gags involving the dragons are consistently funny and, because there are notes of melancholy and loss along with the general adventure, joy and triumph, DeBlois achieves a somewhat novelistic feel.

However, one key story point that’s somewhat blurry and should be crystal clear is how Drago manages to maintain control over his huge primary dragon. We get an explanation; it just doesn’t seem feasible (and we never get a demonstration of how it works). Also, some of the intra-human humor seems as though it was decided the moment needed a joke, rather than that the notion was organically funny; some supporting characters get a fair amount of screen time without developing much.

However, those characters who do progress, especially Hiccup, Stoick and Cate Blanchett’s Valka, are endearing and highly watchable. Toothless of course remains a superstar.

For those who love stories about friendship between humans and dragons, HOW TO TRAIN YOUR DRAGON 2 provides one that is lovely to look at and generally engaging, even though it has a few lulls and that one plot issue.