Home » A Million Ways To Die in the West movie review 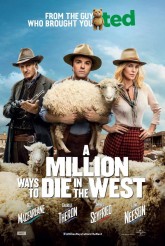 Movie Review: A MILLION WAYS TO DIE IN THE WEST

A lot of laughs, a number of irritants

There are moments of laugh-out-loud brilliance in A MILLION WAYS TO DIE IN THE WEST, writer/producer/director/star Seth MacFarlane’s send-up of classic Westerns. There are also plenty of just generally funny things. And then there are things that will make at least some people go, “I’m not with you on this one.”

It’s 1882 in the Territories, a scrubby stretch of the Old West (shooting locations were New Mexico and Monument Valley in Utah) that contains the tiny town of Old Stump. Sheep rancher Albert (MacFarlane) has a modern perspective on his community – namely that it’s filthy, brutal and full of random things that can kill a person. Albert adores his beautiful girlfriend Louise (Amanda Seyfried). Alas, Louise sees Albert as a poor catch and breaks up with him. Heartbroken, Albert plans to leave town.

Meanwhile, notorious gunslinger Clinch Leatherwood (Liam Neeson) decides to stash his rebellious, unhappy wife Anna (Charlize Theron) in Old Stump. Anna takes a shine to Albert, since he’s very unlike her homicidal spouse, and offers to help him make Louise jealous by pretending to be his girlfriend.

One can guess in the broad strokes where all of this is going. Some of the best laughs involve whiplash surprise, demonstrating the kind of lightning-fast humor MacFarlane is known for elsewhere. Then there are some extreme gags involving various bodily fluids and functions. Those who are amused by this will be very amused and those who aren’t but might like the rest of the movie have to wait it out.

Then there are some racial and child bride jokes. This reviewer will go out on a limb here and say “Yecch” to both. Quentin Tarantino arguably (and there are two sides to the argument) can bring this off sometimes; MacFarlane doesn’t have enough context to make the jokes cut both ways.

The romantic comedy backbone here, however, is what truly becomes chafing. Yes, we can see Louise is shallow and unkind. However, Anna is absolutely amazing, yet her entire reason for existence seems to be to give Albert pep talks. Albert winds up yelling at her for being secretive, but he’s willing enough to let everything be all about him. And at a certain point, we really don’t need to hear Anna go on any longer about what a great guy Albert is; there’s more rhetoric than substance here. Yes, Albert is a man of peace, but that’s largely to do with his lack of fighting skills. He’s observant and funny, but a relentless whiner. This is okay – he’s a comedy hero, after all – but we don’t need so many speeches about how terrific he is. Show, don’t tell. And if you’re not going to show, then really don’t go on about it.

Neeson is suitably menacing with a veneer of charm – this is a bad guy who enjoys his evil. Neil Patrick Harris does a fine job as the smarmy proprietor of Old Stump’s upscale moustachery (that would be the boutique that caters to moustaches). Giovanni Ribisi and Sarah Silverman find a great comedic rhythm as, respectively, Albert’s best friend and the best friend’s true love, a couple who manage to maintain their innocence despite her working girl job.

Composer Joel McNeely deserves special kudos for coming up with a music score to out-Western every other Western music score that’s ever been; his compositions are delicious straight-faced parodies. Alan Jackson brings similar earnestness to his rendition of the closing ballad.

There are hilarious things within A MILLION WAYS TO DIE IN THE WEST, there are cringe-worthy things, and there are many elements in between. Is it worth it to take the dirt that comes with the gold? From here, it’s about a forty-sixty call, weighted toward the good stuff, but with plenty of caution about the bad.