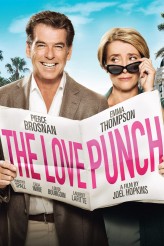 If THE LOVE PUNCH had come out in the ‘70s, with two big-name stars and its cheery attitude, chances are it would have been a hit. The movie’s problem is that it’s coming out in 2014, and although its particular concerns (corporate raiders, vanishing pension funds) have a timely ring, the overall effect is retro. For some, this will be a plus; for others, this kind of lighthearted thriller seems now the stuff of episodic network TV.

Emma Thompson and Pierce Brosnan play, respectively, Kate and Richard, a now-divorced couple with a daughter heading to college and an ambivalent relationship with one another – they carp at each other with a mixture of affection and irritation. Then Richard discovers that the company he and Kate have worked for and expected to provide for them in old age has been pounced on by a corporate raider (Laurent Lafitte) who has absconded with the pension funds.

Desperate, Richard turns to Kate and they journey together to Paris to confront the scoundrel, who is simply delighted that the law allows him to get away with this shocking behavior. Since pleading gets them nowhere, Kate hits upon the idea of stealing the valuable diamond that the raider has given to his fiancée (Louise Bourgoin) for their upcoming wedding. The plot involves bringing in old married friends Jerry (Timothy Spall) and Penelope (Celia Imrie), who think Richard and Kate are getting back together, and impersonating rich Texans.’

Although Richard is a more nuanced character, the storyline isn’t a million miles from what Brosnan used to do in REMINGTON STEELE (Bond was never this innocent). Despite a bit of strong language, there’s a sense of safety here, though we’re in excellent hands – hard to go wrong with Thompson, Brosnan, Spall or Imrie, and as the whole film was shot in Paris, the locations are consistently inviting.

Although THE LOVE PUNCH touches on the pains and disadvantages of aging, and is sincerely outraged that the kind of high-end thieving it depicts is legal, it is overall fluff. However, it is well-made fluff of the sort we don’t see much of any more, so if this is a genre you enjoy, it’s here for you.

Blu-ray Review: SCREAM 2
PIRATES OF THE CARIBBEAN: ON STRANGER TIDES is one of the Blu-ray and ...
TV Review: AMERICAN IDOL - Season 12 - “Semifinalist Round 3”
CD Review: THE DEVIL'S HAND soundtrack