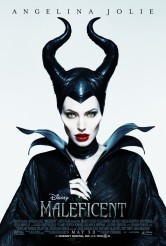 Angelina Jolie is luminous in this odd but engaging revisionist fairytale

Almost everyone who saw Walt Disney’s animated SLEEPING BEAUTY as a child, regardless of when that childhood was, had the crap scared out of them by the villainess Maleficent. An evil fairy who cast a death spell on an innocent baby, had green vapor surrounding her gestures and who could turn into a giant fire-breathing black-and-violet dragon, Maleficent was a field for the ages.

At least, she has been until now. She’s still a fairy and still has that distinctive headdress – though the curved horns are now part of her head – but this Maleficent (Angelina Jolie) is more righteous than wrongdoer. Yes, she does curse baby Princess Aurora, but by the time we get to that part of MALEFICENT, though we can’t agree with her choice of victim, we can hardly blame her for wanting to settle the score.

When Maleficent is a young fairy (the excellent Isobelle Molloy plays her as a child, with Ella Purnell briefly as her adolescent self), she flies through the magical moors on great powerful wings, reveling in her unusual companions and in life itself. The nearby kingdom of humans resents and fears the moors, but one day, a young boy named Stefan (Michael Higgins) makes his way there, intent on theft. Maleficent forgives Stefan and they become friends, then something more. And then Stefan’s ambitions get the better of him and he sets in motion events that will at once fulfill his longtime dreams and earn him Maleficent’s everlasting hatred.

As in SLEEPING BEAUTY, three colorful little fairies (played by Imelda Staunton, Lesley Manville and Juno Temple) attend Aurora’s christening and wind up raising her in a cottage in the woods after Maleficent curses the princess to prick her finger on a spindle and fall into a deathlike sleep on her sixteenth birthday.

Aurora (Elle Fanning) grows up with no idea that she’s a princess. At this point, the story takes a sharp turn from previous versions and becomes very much its own creature. There’s a place where many viewers will be able to guess what will happen due to another recent film – not that MALEFICENT is copying anything, but the trajectory is notably similar – but it works nonetheless.

Screenwriter Linda Woolverton, who wrote Disney’s BEAUTY AND THE BEAST and THE LION KING, among other things, has a great talent for giving coherence to abstract notions (she gave a coherent story spine to ALICE IN WONDERLAND, a piece that starts out in opposition to linear storytelling). Here she has constructed something that touches on nearly all the elements we remember from the animated SLEEPING BEAUTY, yet puts a very different spin on what’s happening and why.

Maleficent is one of Jolie’s best roles in years. Outfitted with subtle makeup that gives her a slightly but not entirely unearthly appearance, and of course that killer headdress, Jolie seems exactly like what we’d expect Maleficent to be like if she were more ambiguous than evil. She is immensely powerful, alluring, emotive and sometimes very funny in a deadpan manner. The actress appears to revel in the role, giving Maleficent a real joie de vivre as well as the regal bearing that makes sense for someone so entirely in control of her domain. Robert Stromberg, making his feature directorial debut after a celebrated career as a visual effects artist, often photographs his lead in slight shadows, an unseen, pensive observer who nevertheless is still clear to us. It’s a nice way of making a point about Maleficent optically rather than verbally.

Stromberg’s background no doubt contributes to the fluidity and dimensionality of many of Maleficent’s strange moorland friends, including walking trees, the inevitable dragon (no movie about Maleficent would dare leave that out) and the raven who’s her closest companion. Tom Riley is swell as the raven in human form.

Fanning is indeed endearing as the almost-always happy Aurora. She’s almost comically joyous, yet doesn’t come across as a goody-two-shoes, but rather someone who’s at home wherever she is because she is immediately excited by everything she encounters.

Copley does a good job of charting Stefan’s increasing guilt, misery and obsession, while Brenton Thwaites is suitably charming as Prince Philip.

Some people do not want their fairytales revised, and fair enough. For those who either enjoy seeing inventive variations on a theme and/or who can take MALEFICENT on its own terms – and for anyone who likes to see Jolie playing powerful women – this is a great time, and a rather lovely one.