© 2014 Daniel Smith/FOX
Jack (Kiefer Sutherland) asks to be reinstated into the field on 24: LIVE ANOTHER DAY

Finally, what Jack has been trying to prevent comes to light for everyone to see 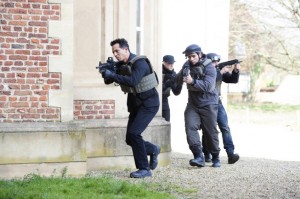 The CIA prepare to raid a secret terrorist location on 24:LIVE ANOTHER DAY | © 2014 Daniel Smith/FOX

The last episode of 24: LIVE ANOTHER DAY gave us what we have been hoping for since the start – the chance for Jack Bauer (Kiefer Sutherland) to once again be given a chance to stop the bad guys from doing bad things under the flag of the U.S. government.

Now obviously, this is beyond far-fetched considering Bauer has been a wanted man for years and did some awful things in Season 8 of the show, albeit justified awful things. But when you have the attention of the President, and in this case, how couldn’t Jack have Heller’s (William Devane) attention after taking hostages inside the U.S. Embassy in London not to mention that whole breaking out of the CIA jail and all.

But in “3:00PM to 4:00PM” the CIA and the rest of the U.S. government finally understand what Jack has been trying to prove when Chloe (Mary Lynn Rajskub) and Agent Kate (Yvonne Strahovski) decipher the hack code that was implanted into the drone command that killed a number of soldiers. It also didn’t hurt when Margot Al-Harazi (Michelle Fairley) decided to spill the beans about being able to control multiple drones at once.

So now Jack asks Heller to be put back in the field and he knows a way to get to Al-Harazi through one of her contacts but Jack won’t tell who the contact is without being put in the field. Something we will no doubt see next week after the CIA raid on an abandoned compound they thought was the Al-Harazi base goes horribly wrong. We also will get the team-up everyone was probably hoping for with StraHOTski’s Kate and Jack.

The rest of the episode dealt with the dispatching of the son-in-law that wanted no part of Al-Harazi’s plans to kill a bunch of innocent Londoners and he alerted the CIA to their location (of course it was the wrong location). So with the approval of her daughter, Simone (Emily Berrington), puts one right in his head as punishment.

Five episodes down, only eight to go. I still think we haven’t seen everything this season is going to give us in terms of plotlines so something big should be brewing, at least hopefully.