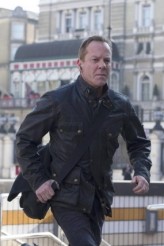 © 2014 Daniel Smith/FOX
Jack (Kiefer Sutherland) is on the move trying to stop a terrorist attack in 24: LIVE ANOTHER DAY 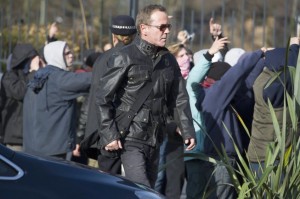 Jack (Kiefer Sutherland) is on the move trying to stop a terrorist attack in 24: LIVE ANOTHER DAY | © 2014 Daniel Smith/FOX

Obviously whenever you go into a season of 24, regardless of whether or not it has been off the air for four season, you expect certain things to take shape.

Jack not only cripples a couple of innocent protestors in order to gain access into a highly guarded British center but he does quite a bit of pushing and shoving of people in the London subway as well as knocking out a couple of doo-gooders that were trying to protect a girl they thought were in danger. I assume we will see more of this to come in the following episodes as we know Jack does whatever it takes to get the job done.

Now one thing we still are in the dark about how Jack really knew that the hacker was somehow tied to the plot to kill a bunch of people in London prior to saving Chloe (Mary Lynn Rajskub). Is he working for some shadow agency? Is he just doing it as he said because he owes President Heller (William Devane) from prior seasons, as well as obviously Audrey (Kim Raver) or is there another force in motion here?

One of the things about being gone for four years (and something they have address smartly on the show so far) is that we are in the dark about where Jack has been this whole time. He had that helper in the first two episodes that may have mob ties but other than that, we don’t know where he has been, what he’s being doing or who he has been associated with. Along those same lines we learned a bit why Chloe went emo as both Morris and her son Prescott were killed a few years back in what she says was a hit that was supposed to be her as a result of her interaction and helping Jack. So, it isn’t a surprise so much that she wasn’t that glad to see him in the opening episode or has been hesitant to help him. Hopefully, where Jack has been all this time will come to light.

I am also enjoying the brutality that is Kate (Yvonne Strahovski) in her pursuit of Jack for some sort of retribution for her error in marriage. She is every bit as determined as Jack and is willing to go that one step over the line in order to make sure the job gets done. At some point, I imagine we will see both on the same page but it is almost like in Season 3 when Michelle (Reiko Aylesworth) was given a chance to shine not only as a star CTU member but as an action star as well. She really was the second star player of that season and added a little something special that was missing from some of the latter seasons.

One thing has been refreshing is that 24 is back at being what it is best at – a gripping political action drama that is really unlike anything else on network television. It is nice to have it back and we are just getting started.