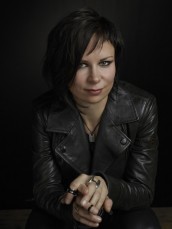 The actress talks coming back to Chloe 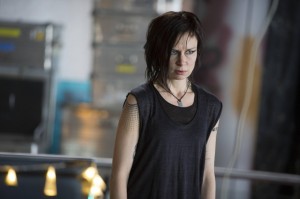 It’s not really a surprise, then, that Chloe and Rajskub are back for 24: LIVE ANOTHER DAY, Mondays at 9 PM on Fox. Although Jack and Chloe begin the twelve-episode season as adversaries, odds are good that they’ll reach détente before long.

Rajskub, a Michigan native who does standup comedy and improv when she’s not working in films (SUNSHINE CLEANING, JULIE & JULIA, SAFETY NOT GUARANTEED) and TV (HOW TO BE A GENTLEMAN, ARRESTED DEVELOPMENT, CALIFORNICATION) is at a Q&A session Fox holds for the Television Critics Association and 24: LIVE ANOTHER DAY.

Rajskub has written and performed in several one-woman shows. She says the audience contains both 24 devotees and people who have never seen the series. “It’s very strange. Sometimes people sit there and they’re just like, ‘Oh, it’s Chloe,’ or sometimes people don’t know 24. They’re a younger generation and their family hasn’t passed it on to them. They’re in that window where they don’t know the show, so then, usually with people in the audience, it’s always twofold, the person who really knows the show and the person who’s like, “I don’t know it.” So it’s like, am I an a-hole for talking about it, or for not talking about it? So finding creative ways to address that has been fun.”

On the panel, Rajskub is asked about the outpouring of fan support for Chloe as soon as 24: LIVE ANOTHER DAY was announced. “There’s no Chloe without Jack. Let’s start right there. Right? Thank you. Yeah, it was pretty surprising to me. It was a strange two-month-or-so period where it was every day on Twitter and me waiting to see if I was going to be included. I called Kiefer when I first found out and he was like, “Mary Lynn who?’ [laughs] Kidding, you guys, I’m kidding. But he did say, ‘Yeah, I’ll try. I’ll try to put in a good word for you.’ It was really nice on Twitter and really strange. You know, I have a lot of people who refuse to call me anything but Chloe. So yeah, it was great. It was a nice surprise.”

As for dealing with the recognition, Rajskub jokes, “Oh, it’s so difficult to have a character that people like so much.” She adds more seriously, “I mean, it’s interesting, because I never thought that 24 would come back and I never thought it would come back in this format. I had just started getting away from Chloe [when] I’m ready for it to start back up again.”

Rajskub notes that she’s a 24 fan herself. “I have to say, I just finished [reading the script for] the second episode, and it’s very daunting, not that I’m an objective reader at all, but reading the first episode, it was like, ‘Okay, you’ve got to do the same things, so that it feels like 24, but do it differently. And I got to the end of the second one, and I got a little like, ‘Oh, we’re back.’ It left me on the edge of my seat and wanting more.”

After the panel, Rajskub makes time for a few more questions. She says that although Chloe had a new baby when we last saw her at the end of Season 8, we won’t see her being a mother. “Some bad stuff has happened. She’s probably farther away from being a mom than she’s ever been. She’s embroiled in some hidden government activities without her family.”

Is there anything else she’d like to say about 24: LIVE ANOTHER DAY right now?