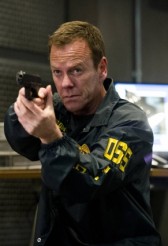 Jack gets cornered but doesn't go down without a fight, plus torture! 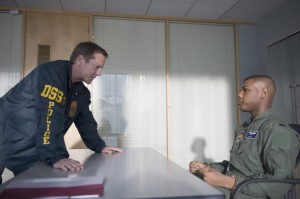 Last week my review stated there are always things to expect when watching a season of 24, namely:

But I totally whiffed on No. 5, which is torture. Never goes a season without someone (or multiple someones) getting tortured to some means.  That happened in “2:00 PM to 3:00 PM” as Margot Al-Harazi (GAME OF THRONES’ Michelle Fairley) proved she is literally willing to do anything to get what she wants including cutting off her daughter’s own finger.

I love that we get some of the rationale behind why Jack (Kiefer Sutherland) has gone about covertly and using brutal tactics in order to get information about the pending attack from the military drones – he didn’t trust President Heller’s (William Devane) administration because they labeled him a terrorist. After Season 8, Jack was on the run because the public in general didn’t hear “his side of the story” as Jack states even though he had “earned the right” to have his side told. All very sound ideals. And it gives the basis for LIVE ANOTHER DAY some much-needed ties to the previous season (although granted they have done a fair job with this so far).

Much of the action takes place in a single room in this episode as Jack after infiltrating the American Embassy was able to get the drone communications card from the Marine framed for the drone bombing and is trying to upload the data (via 56k modem apparently) to his “friends” at Open Cell. Surrounded by Marines, Jack finally talks to Heller and it is an interesting conversation between two people that have a very deep history on the show.

While Heller wants to believe what Jack is saying is the truth, his past from Season 8 has him doubting his motivations as he may no longer be the patriot that Heller thinks he still is. So it creates some decent tension about whether the Marines will storm the room and kill Jack. However, this is 24 and there’s no way that’s happening so we can pretty much guess there is another ending.

Luckily, after hearing the conversation with Heller, CIA Agent Kate (Yvonne Strahovski), decides to take matters into her own hands and goes through a ventilation shaft that I guess the Marines just failed to realize was there and gains Jack’s confidence that she believes him.

24 is just heating up and I like the idea of a Kate and Jack partnership as it could be one that kicks much ass. So far LIVE ANOTHER DAY is delivering the type of storyline and action we should be expecting from this show.