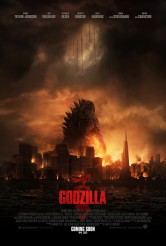 An honorable resurrection of the big guy, with lots of nods to his origins

No movie can be all things to all people, but GODZILLA would seem to have an especially rough time in this regard. The original 1954 Japanese film GOJIRA is about a giant monster that arises and decimates cities in response to the testing of nuclear weapons. The message was sincere, but the effect (if it ever wasn’t) is now camp.

So there are people expecting a kickass giant monster movie, people expecting the Godzilla they know and love, people still smarting from the 1998 GODZILLA, fans of the cartoon version, fans of the sequels where Godzilla battled other monsters and viewers who just want to see lots of explosions and rubble. What everyone gets is part disaster movie, part war movie and part (of course) monster movie.

Director Gareth Edwards (whose previous feature MONSTERS was an excellent low-budget trial run for this) and writer Max Borenstein, working from Dave Callaham’s story, come with a coherent way of integrating things one reasonably expects from a movie starring Godzilla, starting with the title character. The look is clearly reptilian/amphibian and huge, but his overall shape incorporates the traditional Godzilla frame, rather than going for something more like a dinosaur. Other elements that are part of this mythology’s bedrock include parables about playing with radiation,Japan and, at the risk of being a bit spoilery, giving Godzilla a worthy opponent.

Here’s the set-up: in 1999, some very strange findings are made after a mine collapses in thePhilippines, which clearly signifies something major to a pair of scientists (Ken Watanabe and Sally Hawkins). At the same time, nuclear engineer Joe Brody (Bryan Cranston), working at a power plant inJapan, finds some troubling patterns in his readouts that can’t be mere earthquake activity. Something very awful happens.

Fifteen years later, Joe’s now-grown son Ford (Aaron Taylor Johnson) is a bomb defusing expert with theU.S.military, who arrives home inSan Franciscoafter a long tour of duty. Ford wants nothing more than to hang out with his loving wife Elle (Elizabeth Olsen) and their little boy Sam (Carson Bolde), but a personal matter forces him to go back to his childhood hometown inJapan. While Ford is there trying to sort things out, all hell breaks loose. Ford’s efforts to get back to Elle and Sam put him for awhile with U.S. Navy Admiral Stenz (David Strathairn), who is in charge of the increasingly difficult task of trying to contain the situation and the collateral damage, which is massive.

Buildings get knocked over, bridges get torn apart, tidal waves are created, there are massive firestorms and there is generally as much well-wrought havoc as a GODZILLA movie ought to have. Additionally, there are some components of design that pay homage to the late H.R. Giger without ripping him off, and director Edwards even gets to incorporate some of the octopus tentacle imagery that worked so well in MONSTERS.

Johnson (of KICK-ASS) makes a perfectly credible, compassionate hero.Cranston gives his all as the guilt-ridden engineer and Watanabe provides a sense of wisdom and wonder. Strathairn is admirably no-nonsense.

The inherent narrative problem with GODZILLA is that if he’s easily affected by humans, this diminishes him; if he’s not, it’s hard to create a storyline for the human characters. The film addresses this as best it can, but there are a number of coincidental shortcuts to put Ford on the scene when otherwise we’d just be watching sets of random people.

The tone is somewhere between deep gravity and adventure, but there’s no tongue-in-cheek jokiness with the premise. All of the characters are terrified, which keeps everything grounded – any sense of light, curiously, comes in the iconic creature moments.

GODZILLA emerges as a good if somewhat unexpected somber movie that stands even taller when we acknowledge all the pitfalls it avoids.