Game of Thrones review First of His Name Season 4 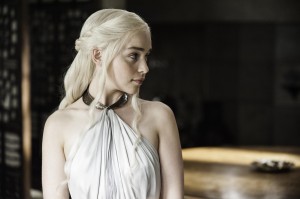 GAME OF THRONES is doing its slow build thing again with “First of His Name,” albeit the episode ends with a satisfying bang as Jon Snow (Kit Harington) and his band of volunteers from the Night’s Watch raid Craster’s Keep, killing all of the deserters, including the odious Karl Tanner (Burn Gorman). Though Jon et al don’t know it, they also help rescue Jon’s half-brother Bran Stark (Isaac Hempstead-Wright) and his traveling companions, Jojen (Thomas Sangster), Meera (Ellie Kendrick) and Hodor (Kristian Nairn). Bran also possesses Hodor briefly in order to kill Locke (Noah Taylor), who had been sent by Ramsay Snow to murder him. Bran decides against letting Jon know he’s there, as Jojen points out that Jon, in his desire to protect Bran, would prevent them from traveling beyond the Wall.

Across the narrow sea, Daario (Michiel Huisman) secures the Meereen Navy for Daenerys (Emilia Clarke). However, when Daenerys hears that Astapor, which she previously liberated, has fallen to a slaver king, she opts to stay in Essos to rule there rather than risk more backsliding.

In King’s Landing, young Tommen Baratheon (Dean-Charles Chapman) is crowned. Cersei (Lena Headey) appears to be making conciliatory gestures toward Joffrey’s young widow Margaery (Natalie Dormer), though no one should trust the Queen Regent as far as anyone can throw the Iron Throne. Cersei says Joffrey did things that shocked her, and she is not easily shocked (an understatement). Still, she adds, there is no love like that of a mother for her first-born. Cersei and Margaery both seem in agreement that Margaery should marry Tommen.

Tywin Lannister (Charles Dance) agrees, and reiterates that Cersei should marry poor Loras Tyrell. It seems that the Lannister gold mines stopped producing three years ago, and while this is still a secret, the Lannisters need the Tyrell fortune. Cersei says she understands.

Cersei also goes to Prince Oberyn Martell (Pedro Pascal), who assures her that Cersei’s daughter Myrcella is happy in Highgarden. Cersei wants Oberyn to send Myrcella the gift of a ship that Cersei is having built for her.

In the Vale, Petyr Baelish (Aidan Gillen) advises Sansa (Sophie Turner) to hide her identity from strangers. Of course, Sansa’s Aunt Lysa (Kate Dickie) knows who she is. Lysa is at first welcoming to her late sister’s daughter. Alone with Sansa, however, Lysa accuses Sansa of seducing Petyr. Sansa is astounded and swears she is still a virgin. When Lysa is satisfied that Sansa is telling the truth, the older woman declares that Sansa can marry Lysa’s little, nutty son Robin (Lino Facioli). When Lysa and Petyr are alone, we learn that they were lovers before and that Lysa has been in love with him ever since. It was at Petyr’s behest that Lysa poisoned her husband John Arryn, King’s Hand to Robert Baratheon, then sent the letter to Catelyn accusing the Lannisters of the murder and essentially starting the war. Petyr has told Sansa he wants to have everything. It is clear that Lysa is a lot fonder of Petyr than he is of her; she has a cleric standing by to marry them immediately.

On the road, Brienne (Gwendoline Christie) finally softens a bit to her squire Podrick (Daniel Portman), as he refuses to leave her even after she releases him from his oath to follow her.

Elsewhere, we see that although Arya Stark (Maisie Williams) continues to travel with the Hound (Rory McCann), she is serious and fairly open in her desire to kill him.

Arya’s sword practice and failed attempt to skewer the Hound provide a bit of action and there’s plenty when Jon and his people attack the deserters. There’s even quite a satisfying moment when one of the worst of the lot, Rast (Luke McEwan), escapes the melee only to be brought down by Jon’s wolf Ghost. This provides several pleasures at once – we see a truly evil s.o.b. brought down, we don’t have to worry about the deserters telling the Wildlings the secrets of the Night’s Watch, and Jon and Ghost are reunited (aww …).

Otherwise, while there are some very startling moments in this GAME OF THRONES  episode – even readers of the books who know what’s coming may be shocked by Lysa’s intensity (great job by actress Dickie) – it’s very schematic. Headey and Dance together are mesmerizing and Brienne and Pod are both so very likable as characters that we don’t mind hanging out with them, but mostly, “First of His Name” paves the story road rather than galloping down it.