An episode that is mostly set-up for bigger things to come, with one major distraction

“He’s lost the plot” is a British saying, meaning that someone is confused. “Breaker of Chains” doesn’t lose the plot of GAME OF THRONES – that would be like losing a world – but there’s a scene in the episode that is so distracting that it’s easy to spin off into meta contemplation and dissection of it, to the detriment of what follows and indeed to the particular plot point itself.

At the end of the previous episode, “The Lion and the Rose,” young King Joffrey (Jack Gleeson) was fatally poisoned at his own wedding feast. Given that Joffrey was an appalling human being, to say nothing of being an awful ruler, not too many mourn his passing. However, his mother, Queen Regent Cersei (Lena Headey), is distraught. She believes her brother Tyrion (Peter Dinklage), Joffrey’s uncle, is guilty of the murder. In Joffrey’s crypt, she begs her other brother Jaime (Nicolaj Coster-Waldau) – who is secretly her lover and Joffrey’s actual fother – to kill Tyrion. Jaime seems pretty sure that Tyrion is not guilty of Joffrey’s death and says that the upcoming trial should produce the truth.

So far, this all makes sense. Then Jaime decides he wants to have sex with Cersei. Cersei protests, but kisses him; Jaime says of her protests, “I don’t care.” Brother-sister relationship and presence of dead child aside (and perhaps only on GAME OF THRONES would those be minor considerations), this is rape.

Now, plenty of horrible things happen on GAME OF THRONES, including rape and, lest we forget, Jaime threw Bran Stark (Isaac Hempstead-Wright) off a tower at the beginning of the series. The difference between the other awful things and this is that this seems intended to be ambiguous and, well, no, it’s not. Even if the woman is Cersei Lannister, who most people feel warrants a punch in the face, nobody deserves rape. Is it rape, however, if Cersei – clearly not in fear of life or physical safety – kisses and clutches at Jaime? Since she said, “No, not here, not now,” and he said, “I don’t care” – and since no less an authority than George R.R. Martin, who wrote the books, says the onscreen scene is a rape, though the comparable scene in the book is consensual, it’s rape. So what are the show makers trying to tell us? What are they trying to make us feel? What do they believe rape to be? Is this supposed to make us worry about Jaime’s rehabilitation, are we not supposed to worry about Jaime, are we supposed to worry that this is going to happen again? Could we have gotten farther away from wondering about what’s happening in Westeros if HBO had broken into the telecast with a tsunami warning?

Unlike other scenes that have been eye-widening – Bran’s fall, the Red Wedding, Theon Greyjoy’s (Alfie Allen) castration – this scene doesn’t really push the plot forward, but instead sends a lot of us tumbling towards meta territory and the rest wondering what this has to do with the price of strangler weed in King’s Landing.

In other news, Sansa (Sophie Turner) is spirited away onto a ship by Ser Dontos (Tony Way). She is greatly surprised to be greeted by Petyr Baelish (Aidan Gillen), who assures her she’s safe – and then has Dontos shot with a crossbow. Baelish swears that Dontos did not rescue Sansa on his own initiative, but rather was acting on Baelish’s orders. Baelish adds cryptically that while Tyrion didn’t have a hand in Joffrey’s murder, Sansa did (news to Sansa).

Tywin Lannister has advice for his younger and surviving grandson Tommen (Dean-Charles Chapman), who will now inherit Joffrey’s crown. Tommen is the second son of Cersei and (though Tommen of course doesn’t know this) Jaime. Tommen seems like a reasonable, attentive young man and Tywin appears pleased with him, though Cersei clearly resents her father (as she sees it) stealing another child from her.

Tywin also pays a visit to Oberyn Martell (Pedro Pascal), who still blames Tywin for the death of Oberyn’s sister, who was married to the Targaryen crown prince. Tywin swears he did not order Gregor Clegane to rape and kill the woman, but Oberyn is welcome to his revenge. Tywin in fact invites Oberyn to sit as the third judge at Tyrion’s trial and offers him a seat on the Small Council that advises the king. When Oberyn expresses surprise, Tywin points out that Dorne was the only one of the Seven Kingdoms that was able to withstand dragons when last the creatures existed in Westeros. The Lannisters will need Dorne to fight Daenerys, not to mention the Greyjoys and Stannis Baratheon.

Margaery Tyrell (Natalie Dormer) is understandably flummoxed to be twice wed to kings, only to be widowed before the marriage is consummated. Her grandmother, Olenna Redwyne (Diana Rigg) counsels patience and notes that, however painful seeing Joffrey die was for Margaery, suffering being at his side would have been much worse.

In his cell, Tyrion gets a visit from his loyal squire Podrick Payne (Daniel Portman), who despite the promise of a knighthood if he’ll testify false against Tyrion, remains faithful. Tyrion is considerably surprised by the news that Sansa has vanished – he’d suspect her of killing Joffrey (she had plenty of motive), except she’s no killer. He’d also suspect Cersei, but she genuinely loved her son; it’s perhaps the only murder in King’s Landing that Tyrion doesn’t wonder if Cersei initiated. Afraid for Podrick’s safety, he orders the young man to leave King’s Landing. Podrick is in tears and Tyrion tells him there has never been a more loyal squire.

Sansa’s little sister Arya (Maisie Williams) is still traveling with Sandor Clegane (Rory McCann). They come upon a cottage where a farmer and his little daughter live. The farmer provides them with food, a bed for the night and offers Sandor a job. Sandor responds by beating and robbing the man, much to Arya’s horror. Sandor is certain the farmer and his child are too weak to survive the winter, and they won’t need the silver he stole.

A group of Wildlings, including Tormund Giantsbane (Kristofer Hivju) and Ygritte (Rose Leslie) decimate a village, and send one surviving child to tell the Night’s Watch about it. The Watch are divided on what to do about it, but Jon Snow (Kit Harington) is with those who believe they are too few to be drawn out, away from the Wall. However, when news comes that the deserters of the Watch are still living at Craster’s encampment, Jon urges an expedition to go kill them – not for vengeance, but because the deserters will certainly tell the Wildling army that the numbers of the Watch are too low to be feared.

Samwell (John Bradley) takes the reluctant Gilly (Hannah Murray) and her baby to a brothel in nearby Molestown, where he thinks they’ll be safer than at Castle Black. Gilly misunderstands and thinks it’s because he wants to be rid of her, when Samwell is clearly in love with her. 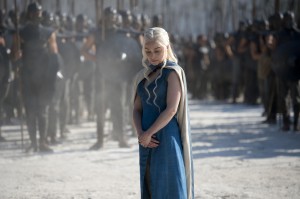 Stannis Baratheon (Stephen Dillane) has heard of Joffrey’s death, and believes it is due to his burning a leech that had gorged on the blood of the late King Robert’s bastard son Gendry (Joe Dempsie). Stannis blames his advisor Davos (Liam Cunningham) for sending Gendry to safety, since Stannis thinks he could use Gendry’s blood to take the Iron Crown. Davos thinks an army would be more useful and comes up with a plan – he has Stannis’ young daughter (Kerry Ingram) pen a letter to the Iron Bank of Braavos and puts Stannis’ name to it.

In Essos, Daenerys’ (Emilia Clarke) champion Daario (Michiel Huisman) bests the champion of the walled slaver city Meereen in single combat. Daenerys tells the listening slaves that she is not their enemy – their masters are their enemies. She has freed two cities already and their slaves have joined her (now huge) army as free people. To make her point, she launches barrels into Meereen that shatter, dropping broken chains onto the ground.

While we don’t see Daenerys’ dragons this time around, the sight of the young woman determined to see the right asses are kicked never fails to please. The scene with Tyrion and Podrick is touching, as is the sequence with Samwell and Gilly, though in the case of the latter, it’s deliberately unclear whether Sam is really making the best choice for Gilly’s well-being.

The scene with Tywin and Tommen provides fleeting hope for the kingdom, though surely the sanity the youngest Baratheon/Lannister represents won’t be allowed to prevail for long. Dance is perfect here, as is Rigg in all her moments.

The sequence with Sandor and Arya reminds us that we need to keep on our toes with characters who start out villainous but seem to thaw. However, surely there was another, better way of doing that with Jaime, unless we’re meant to write him off completely and unless the whole storyline is meant to be buried under a mound of analysis (among other things).