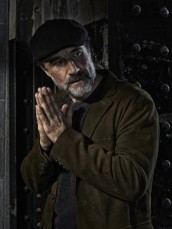 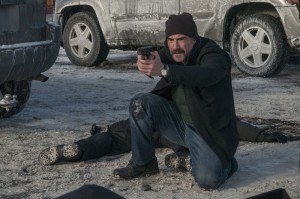 NBC’s CHICAGO FIRE was such a hit of the 2012-2013 season that it took barely a year for it to launch a spin-off, CHICAGO P.D., Wednesday nights at 10 PM. The two series share characters and authentic Chicago locations, as well as executive producer Dick Wolf.

On CHICAGO P.D., Elias Koteas plays undercover detective Alvin Olinsky, a master of blending into the background. Koteas, a native of Montreal, studied acting in New York. He had an early role as a skinhead in John Hughes’ SOME KIND OF WONDERFUL. Since then, he’s been in a number of notable feature films including Atom Egoyan’s EXOTICA, David Cronenberg’s CRASH, PROPHECY, David Fincher’s ZODIAC and Martin Scorsese’s SHUTTER ISLAND.

Last season, Koteas had another police role, a season-long turn as a seemingly compassionate Seattlepolice captain who turned out to be a human monster on THE KILLING. Although CHICAGO P.D. is a drama that is often dead serious, Olinsky seems a comparatively lighter character for Koteas (so far, at least).

After a CHICAGO P.D. question-and-answer session NBC holds for the Television Critics Association, Koteas makes himself available for a little further interrogation.

ASSIGNMENT X: When you finished working on THE KILLING, were you looking to play a character who had a slightly less dark soul?

ELIAS KOTEAS: That took a bit of a toll, even though it was creatively fulfilling, it was a great experience working with great people. I didn’t really know where my life was headed after that. I did know that I wanted to work, so I was open to work, to try to put [playing the character on THE KILLING] behind me – where that journey was going to take me, I had no idea. So all I knew was that I needed to work, because I feel better in my life when I’m working.

AX: Olinsky seems to be, unless they come up with a huge twist, seems like a more civic-minded person than the KILLING character …

KOTEAS: Yeah. So far, they’ve got him as a family man. His personal life is a bit of chaos, a bit of a mess, but he knows his job and he’s comfortable in it. So I think his life is going to reveal itself as we go on. I’m surprised every week – “Oh, I’m doing this now.” He’s got some interesting stuff coming up. I think you’re going to learn a lot, slowly over the episodes, about every character.

AX: How is it playing Olinsky’s ability to hide in plain sight as an undercover cop?

KOTEAS: There’s something about him that appealed to me. I don’t know if it’s the correct thing to say, the right thing to say – you know these guys who are so present, like these Buddhist monks who can actually be in the room and disappear? That’s something that’s very appealing to me. I don’t know if it applies. There’s something about that I really like, where you don’t really know where he is. How that relates to me, I’m going to find out.

AX: Is Olinsky’s chameleon quality all you, or do they position the camera to make that happen?

KOTEAS: I think that it was a collaboration. Once they cast somebody, they see what their energy is and they sort of write around that. I don’t think that they purposely did that until I came along, and sort of figure that out as you go along. It’s like, “Oh, that might work,” “Oh, this might work.”

AX: Most actors want people to look at them. Is there any kind of a contradiction in playing somebody who wants to be invisible and unseen?

KOTEAS: I’m sure there’s this part of my ego that says, “Hey,” my ego tells me to stay hidden, or says, “Hey, you should be doing something else.” So we all have that duality in us, stepping up or retreating.

AX: Does Olinsky use his gun much?

KOTEAS: I haven’t done a lot of that in this show so far, but you can spend a lot of time in the gym, but it does not prepare you to duck and weave and pull out your pistol and go behind a car. You get up quickly and run sideways. It kind of engages different muscles in your body that you don’t really know they’re there [laughs]. So this was a lot of soreness in the beginning, just on a physical level.

AX: You’ve been shooting in Chicago in the dead of winter, but then again, you’re from Montreal. Does the cold bother you?

KOTEAS: To me, I surrender to it. I kind of enjoy it. I mean, I wish I could stay here a little bit longer and enjoy the sun. I feel like I’m on a different planet here in Los Angeles, but no one likes the cold weather, but I was born and raised in Montreal, so cold is in my cells, I suppose.

AX: Do you miss Canada when you’re in the U.S.?

KOTEAS: I visit Canada as often as I can, because my parents are still back in Montreal. It’s the land of my birth, so I’m connected to it, but I’ve been living in the United States for more than half my life, so I sort of feel dual.

AX: Is there anything particular you do when you’re taking on a new role?

I don’t know if this may apply, but I did a film called LET ME IN, where I worked with two [then] twelve-year-old kids [Kodi Smit-McPhee and Chloe Grace Moretz] and the best moment I had was when I spent the whole day working with them and they put their arms around me and said, “Hey, are you all right?” I’ve said this before, but what you really want to do is be a twelve-year-old in some way, the way you approach it, the sense of wonderment. Twelve-year-olds have a great bullsh** barometer. They can tell when you’re faking it, they can tell when you’re there. So I was just kind of following their lead.

AX: Is there anything else you’d like to say about CHICAGO P.D. right now?

KOTEAS: I’m just enjoying it. The best character in the show is the streets of Chicago. I just love it.