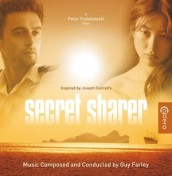 A Polish sea captain finds himself way underwater in desire, and danger when he takes on an adrift woman in the South China Sea for this modernization of Joseph Conrad’s short 1910 story. But perhaps the classiest passenger on board this otherwise rusting ship is English composer Guy Farley (MODIGLIANI), who gives beautiful, moody elegance to this unlikely, and potentially lethal romance between burned-out hero and his potentially lethal catch.

A musician definitely worthy of discovery on this end of the pond, Farley has impressed in both thrillers (THE FLOCK) and romance (CASHBACK). Now SECRET SHARER showcases both styles with a beyond-lush approach for strings, harp, flute and piano, and later a fully turbulent orchestra. Starting off with a Polish-song based accordion waltz that captures a countryman adrift in Chinese waters, Farley creates an intriguing, sometimes soaring approach for two lost souls being brought together, mostly bonded by a gorgeous theme, whose dexterous variations nicely bring to ear the work of John Barry. Keeping a low musical profile even as the ship gets boarded, Farley uses such Oriental instruments as the shakuhachi and taiko drums, yet as musical spice to favor a mostly western approach, much like the sea captain who’s drawn to his exotic catch, finally giving way to more overt menace for the cat and mouse game between the couple and their pursuers.

Far more ethnic in nature is Farley’s unused, companion score to TSOTSI an Oscar-winning South African drama producer by SECRET SHARER director Peter Fudakowski. Blending tribal rhythm with heart-rending strings, it’s hard to understand just why Farley’s score was left in the Serengeti. But this short selection is reason enough to be thankful for allowing listeners to experience this haunting score for a victim of Apartheid who kidnaps a couple’s baby, the criminal’s conscience tormented by the angelic female voice of CRY FREEDOM‘s Nicola Emmanuel and anguished strings. It’s a score whose tragedy, and self-realization keep an even emotional keel, much like SECRET SHARER. Caldera Records show much promise with this debut release, offering a well designed and written booklet by international score specialist Gergely Hubai, as well as an ending audio interview with Farley himself, who insightfully talks about taking an atypical course for SECRET SHARER when the score threatened to veer off into familiarly menacing Asian musical waters.

Click on the link to Purchase the SECRET SHARER soundtrack