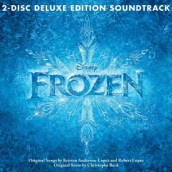 An iced cornucopia of The Magic Kingdom’s greatest fairy tale hits that reprises the Hans Christian Anderson LITTLE MERMAID magic, FROZEN brims over with cute sidekicks, a dashing hero and the upped ante of two princesses – one with a power that Professor Xavier would admire. It all makes for exactly the kind of pre-teen soundtrack catnip that set the studio’s animated standard for a reason, and is once again delivered at the height of hiply imaginative panache. FROZEN‘s memorable numbers have been co-written by the WONDER PETS duo of Robert Lopez and Kristen Anderson-Lopez (who also happen to have musical stage credits like “Book of Mormon” and “Transit” under their belts).

Now this music power couple go from the winsomely sung Zooey Deschanel numbers of their sweetly folksy take on WINNIE THE POOH to full-on BEAUTY AND THE BEAST power ballads. Done at the height of “I want something better-than-this” sentiment, the Lopezes have a terrific girl power-belting duo in Kristen Bell and Idina Menzel, who’ve more than proved their musical chops on screen and stage with REEFER MADNESS and WICKED. Their characters’ sisterly numbers like “For the First Time in Forever,” “Love is an Open Door” and “Let it Go” are the wonderful stuff of cartoon heroines running up hilltops or bursting through doors, delivered with the kind of pleasant pop-orchestral energy that has been spun into Disney Radio gold by Demi Lovato. The guys get the pleasantly goofier stuff, with Jonathan Groff serenading that “Reindeer are Better Than People” and BOOK OF MORMON‘s Josh Gad doing his musical comedy shtick as the singing snowman who dreams of surviving “In Summer.” Maia Wilson’s “Fixer Upper” likewise has a pleasantly jazzy groove that recalls the rhythmic energy of “Under the Sea,” showing off FROZEN‘s numbers as paying particularly nice tribute to the Ashman-Menken Disney songbook.

The same bright, Menken scoring spirit can be found in sumptuous, bright abundance in Christophe Beck’s instrumental score. Having played snowy enchantment with FRED CLAUS and ICE PRINCESS, FROZEN marks Beck’s movie into a full-on Disney feature after his similarly enchanted score for the studio’s Oscar winning short PAPERMAN. Magic abounds in Beck’s adventurously lush, magical approach that connotes the movie’s spell. While none too threatening, Beck gets across the menace of a giant iceman attack, the epically swirling scope of one princess’ unwanted power and the sweeping music that always has an unlikely couple kissing by the happy ending. It’s rousing, fantasy snowstuff on he order of Beck’s first PERCY JACKSON score, with the added interest of bringing out Anderson’s Nordic roots in his use of the Norwegian female Cantus choir and the country’s bukkelhorn, an ethnic instrument (and former ram’s horn) that Beck turns into the eerie voice of FROZEN‘s wintry spell. But whether the actors are singing for self-empowerment or the rousing score is conveying the wondrous eternal winter at hands, FROZEN succeeds as exactly the kind of musical enchantment kids young and old hope to expect from the Disney holiday brand.