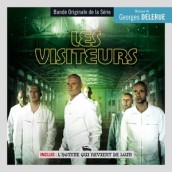 Georges Delerue gets a rare foray into alien-centric sci-fi

Where Georges Delerue had earthbound romance aplenty on his resume in both France and Hollywood, the one genre that was practically absent from his resume was science fiction (though the talking cetaceans of DAY OF THE DOLPHIN could count). This makes Music Box’s ultra-limited release of LES VISITEURS a revelation on the musical order of hearing Delerue’s tunes at Devil’s Tower, though one can certainly expect his lush, beautifully flowing melodies instead of tone rows when it comes to welcoming the white suit-clad alien emissaries of this 1980 French TV miniseries.

Their world-hopping chase accounts for the harmonica, classical quartet, a tango, and jazz pieces, which are heard in delightful, contrast to Delerues’ inimitable, flowing talent for orchestral melody. Graced with a sparkling, transcendent theme that speaks for the kind of Nirvanic intelligence that only space travelers seem to possess above us brutish earthlings, Delerue impresses with his eerie use of rubbed glass, and combinations of electronic and orchestral music, it’s shivering quality and a zither (sounding just like the sci-fi staple Theremin), reminiscent of Barry Gray’s music for the British series UFO. But even with LES VISITEURS human-alien body swap detective plot prefiguring THE HIDDEN‘s asking for more of a darkly pessimistic Delerue score when encountering E.T.’s is like thinking there’s no hope for the universe, as the composer’s energetic spirit gives buoyant, soulfully emotional uplift by score’s end – again with a Baroque inflection that made Delerue one of the great classicist-cum-movie composers. It’s an especially impactful touch to this little gem of a score that most fans likely didn’t know existed.

Ditto Delerue’s 1972 TV horror miniseries score for THE MAN WHO CAME BACK FROM DEATH, wherein a spirit takes vengeance on a brother who’s living the good chateau life. Delerue delicately balances chills with beauty and subtle, spooky-ooky humor, offering a delicate waltz and harp percussion that floats along with eerie zither and strings, all capped off by rhythmically impactful end title. It’s the music of a classic ghost story, prefiguring the lyrical darkness for Delerue’s unused score to SOMETHING WICKED THIS WAY COMES. An example of genre music in the most delicate of hands, LES VISITEURS and THE MAN WHO CAME BACK FROM DEATH revel in a lyrical approach to the fantastic, capturing as much melodic poetry as Delerue would give to any romantic subject.

Clink on the link to Purchase the LES VISITEURS soundtrack