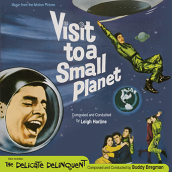 Kritzerland gives some long overdue love, and musical laughs to the soundtracks that graced Jerry Lewis

Kritzerland is proving to be the France of retro record labels by being just about the first company to get into the Jerry Lewis soundtrack musical catalogue, first with Walter Scharf’s delightful THE GEISHA BOY and now with the double-header of VISIT TO A SMALL PLANET and THE DELICATE DELINQUENT, two scores that reflect Lewis’ wacky ingenuity.

The star often had fun playing off of movie genres, and his chance to indulge in sci-fi tropes is also heard in the absolute delight that composer Leigh Harline has in making hay with aliens-among-us clichés, as particularly heard in The Theremin. Its bizarre electronic oscillations had become the rage with THE DAY THE EARTH STOOD STILL. But even Bernard Herrmann didn’t give that instrument the workout that Harline does here, with solos galore for the floating and wall-walking antics of Lewis’ Krelton. When it comes to the far more human orchestral players, Harline gives PLANET a giddy, pizzicato-pokey touch that’s nothing but pure cartoon sweetness, fitting for a composer who got his start with Walt Disney. Selection of lounge-beat jazz by the likes of Johnny Mandel and Victor Young give that soundtrack the kind of swinging hepness that Lewis would really take to town as THE NUTTY PROFESSOR later on.

You can also imagine Leonard Bernstein and Stephen Sondheim giving a listen to Buddy Bregman’s score to THE DELICATE DELINQUENT, with its rollicking Latin samba beat depiction of juvenile malfeasance, which could just as well capture the swagger of Bernardo and The Sharks. DELINQUENT marks the first release of any score from this arranger / producer for Ella Fitzgerald and Cole Porter, and it’s the epitome of everything that was wonderful about comedy scoring’s jazz era. Lewis is once again given a sweet orchestral touch, his hapless bumbling hit with lurching, exasperated snares and strings that could just as well befall Elmer Fudd. The DELINQUENT‘s bumbling attempts to reform himself at the Police Academy also give Bregman that chance to blunder about with patriotic military marches, while a “Bout” surprises with Sumo-sized Asian percussion. A thoroughly delightful listen from space to earth, one can only hope that Kritzerland continues to release these gems from the film repertoire of a human cartoon that inspired similar zaniness from the composers.