A strong episode, unexceptional only by this series’ lofty standards 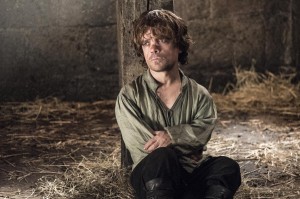 GAME OF THRONES is such an extraordinary show that even episodes that are mainly set-up outshine much of what else is available on TV, even premium cable. Such is the case with “Oathkeeper,” which mainly suffers in comparison to more eventful segments of GAME OF THRONES.

Daenerys (Emilia Clarke) has become something of an expert in liberating slave cities by now. When the slaves of Meereen are debating whether or not to revolt, Daenerys’ general Grey Worm (Jacob Anderson) and some other former slaves enter the barracks with weapons and encouragement. The next day, the slaves of Meereen successfully rebel. Daenerys is again hailed as a liberator. Since the slave masters nailed 163 slave children to posts in order to taunt and deter Daenerys, she orders the same be done to 163 masters, despite advice from Barristan Selmy (Ian McElhinney).

During a sword practice session, Bronn (Jerome Flynn) manages to beat Jaime (Nicolaj Coster- Waldau) with Jaime’s own fake hand. Bronn then suggests that Jaime go visit his imprisoned brother Tyrion (Peter Dinklage). A conversation between the Lannister brothers establishes that Jaime doesn’t believe Tyrion killed King Joffrey, Tyrion knows Joffrey was Jaime’s son, Cersei (Lena Headey) wants Jaime to kill Tyrion and Jaime won’t kill his brother. However, Jaime also sees no way to break Tyrion out of jail, but since he’s sure of Tyrion’s innocence, he thinks the upcoming trial will produce the truth. Tyrion is not so confident of this outcome.

Cersei harangues Jaime about killing Tyrion. She also wants him to go after the missing Sansa Stark (Sophie Turner), who Jaime had sworn to bring home safely to her mother, Catelyn Stark. Even though Catelyn is dead, Jaime won’t go after Sansa at Cersei’s behest.

Sansa is in fact on a ship with Petyr Baelish (Aidan Gillen). Baelish explains to Sansa, who is torn between incredulity and horror, that he’s going to marry Sansa’s aunt Lysa Tully of the Vale. Although he’s been in the Vale for weeks, Baelish arranged the murder of King Joffrey, as Joffrey was very unstable and Baelish’s “new friends” are very grateful to him for his actions. His new friends will help him get what he wants, which is “everything.” Although Sansa didn’t know it, there was poison in the necklace she wore to the wedding. One of the stones was missing by the ceremony’s end. But who would actually dare poison Joffrey?

That would be the redoubtable Olenna Redwyne (Diana Rigg), who is now returning to Highgarden. When her granddaughter Margaery (Natalie Dormer), Joffrey’s unconsummated widow, asks about Joffrey’s death, Olenna says she wasn’t going to sit by and see Margaery married to that beast. As Joffrey’s little brother Tommen (Dean-Charles Chapman) is to be the next king, Olenna advises Margaery to make a good impression on the lad before Cersei can poison the boy against her. To this end, Margaery visits Tommen’s bedchamber. He’s too young to seduce, but by the time Margaery leaves, Tommen is clearly entranced.

Jaime sends Lady Brienne (Gwendoline Christie), who had also sworn to protect Sansa and Arya, to find Sansa (they wrongly believe Arya to be dead). It’s probably also a good idea to get Brienne away from Cersei. Jaime gifts Brienne with his sword of Valerian steel, made from Ned Stark’s sword. Jaime says that all the best swords have names, so Brienne dubs this “Oathkeeper.” Jaime also gifts Brienne with a suit of armor fitted to her dimensions and Tyrion’s erstwhile squire Podrick Payne (Daniel Portman). When Brienne objects, Tyrion explains that Podrick is in danger if he remains in King’s Landing.

Ramsay Snow’s henchman Locke (Noah Taylor) shows up as a recruit to the Night’s Watch. He tells Jon Snow (Kit Harington) he was arrested for poaching. Acting commander Allister Thorne (Owen Teale) hates Jon, but is advised to send Jon after the Night’s Watch deserters holed up in Craster’s old keep. Jon gets a group of volunteers for the mission, including Locke.

A baby is born at Craster’s Keep, where the deserters are busy raping the remaining women and generally being despicable. When the last of Craster’s babies is born (Craster himself is dead), the women tell deserter leader Karl Tanner (Burn Gorman) that Craster would take the male infants outside for the gods. Karl has one of the men leave the baby outside in the snow. It is collected by a White Walker, who brings the infant back to the rest of the Walkers. When theWalkerleader touches the baby’s face, the infant becomes aWalker.

Bran (Isaac Hempstead-Wright) has a dream that his direwolf Summer is injured and that Jon’s wolf Ghost is being held captive. When Bran and his companions Jojen (Thomas Sangster), Meera (Ellie Kendrick) and Hodor (Kristian Nairn) try to rescue Ghost, they are captured by the Night’s Watch deserters at Craster’s Keep. Hodor is stabbed in the stomach.

Bravo to GAME OF THRONES the series for quickly revealing Joffrey’s murderer (in the books, this took quite awhile) and the conspiracy behind it. Although it’s not to avenge any one of Joffrey’s horrendous acts per se, it feels that there’s something balanced in having his death result directly from his mistreatment of Sansa, as it seems that Sansa’s conversation with Lady Olenna is what sealed the king’s fate. Rigg plays Olenna as someone who seems entirely capable of orchestrating anything she wishes, so there’s not a moment of wondering how this came about. Of course, this has also resulted in Sansa being in the hands of a supremely unreliable “protector,” so it may yet be that Joffrey continues to victimize her from the grave.

While it remains thrilling to see Daenerys and her forces liberate a city, and the show makers deserve praise for putting a new spin on it, the key here seems that Daenerys is bent on vengeance, which is understandable but seems liable to come back and bite her. Clarke and her immediate cast mates are expert as always.

The scene between Tyrion and Jaime is a highlight, as is Brienne’s sendoff. We fear for both Brienne’s physical safety and the state of Jaime’s soul. We also of course fear for Tyrion, but meta reasoning dictates that he’s as close as GAME comes to indispensable.

Finally, something more eventful than visions happens with Bran. We can’t blame him for wanting to rescue Ghost – this seems quite natural, given Bran’s bond with his own wolf Summer – and it’s great to be invested in what’s happening with his character again. Hodor’s fate is of special concern, as he’s not only a very sympathetic character, but seems tied to Bran’s survival.

As for the White Walkers, the spectacle involving them is supremely creepy and seems aptly solemn. It’s a little unclear from a story standpoint why they want only males – from a narrative standpoint, it explains to the viewers that the Walkers don’t procreate naturally, but it seems like a female ice ghoul would be just as deadly as a male one. Maybe the “only boys” rule was from Craster, rather than the Walkers. Perhaps clarification will come in a later episode.

As with all of GAME OF THRONES, there’s excellence of craftsmanship on all levels here. It’s just that “Oathkeeper” doesn’t get the blood racing the way some other episodes have done.