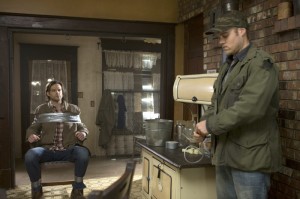 With a series as arced as SUPERNATURAL, it’s surprising to see a standalone episode so late in the season, but “Alex Annie Alexis Ann” is a perfectly decent example of the breed. Apart from Sam’s (Jared Padalecki) concern that the Mark of Cain may be making Dean (Jensen Ackles) a lot more bloodthirsty than is healthy, and one crack from Dean that Sam wouldn’t save him from certain death, this could fit almost anywhere in the canon.

When old pal Sheriff Jody Mills (Kim Rhodes) calls in with a vampire problem, the boys arrive on the scene to find a mysterious situation. A young woman (Katherine Ramdeen), who vanished eight years ago as a child named Annie Jones, now calls herself Alex and has turned up in Jody’s jail. Alex is human, but she’s been living with a nest of vampires, and even though she’s now trying to run away – one of her “brothers” came to bring her back and Jody decapitated him – she doesn’t want to betray their location. Alex feels they are family, though she’s afraid of what her vampire Mama (Ashley Crow) will do when she finds out that one of her sons has been killed due to Alex’s actions.

Sam and Dean are able to capture one of Alex’s brothers. Under torture, he explains that Alex ran away because she thought being human made her better than them (Dean yells that this does make her better). Alex has been acting as a lure for men that her vampire family can feed on and kill; granted, when we see a flashback of one of these incidents, we can understand why Alex doesn’t mind the death of the extremely sleazy man ready to force himself on an underage girl. Alex has also given her blood when no other source is available, but she is otherwise seen as a member of the clan.

Jody brings Alex with her to a remote cabin, but the vampires find them and take Alex back. Although Sam and Dean insist that when they find the vamps’ hideout, it will be search and destroy, Jody says she is rescuing Alex no matter what. Meanwhile, Mama isn’t angry at Alex at all. She just doesn’t understand why Alex ran away. Alex explains that she cannot deal with the blood and killing any more. Mama says she blames herself for Alex’s feelings of guilt. Mama wanted to see Alex grow up, so she let Alex stay human. Now, however, if Alex is turned, she will no longer feel guilt.

The vamps get the drop on Sam, Dean and Jody. Mama is particularly irate at Jody for trying to steal her child. Jody, who lost her husband and child to monsters years ago, says that motherhood is not about trying to change your child as soon as that child expresses a desire to be her own person. Mama wants Alex to feed on Jody to complete the vampire transformation. Instead, Alex stabs Mama to save Jody. Dean saves Sam and decapitates the remaining vamps. Alex, human again (since her sire is dead and she didn’t complete the transformation), goes to live with Jody.

The issues here are intriguing, even if nobody found a way to make them apply directly to the Winchesters. The episode really focuses more on the dynamics between Jody, Alex and Mama. Crow makes an especially strong impression as a matriarch still capable of feeling love and loss.

As for the bit of continuity about the Mark of Cain, we’re with Sam on this one. Dean decapitating a vamp is one thing; Dean demanding that the vamp look at him while it’s happening is leaping way over the sadism border. Blessedly, nobody in the episode (with the possible temporary exception of Alex, who is after all a teenage girl) does any sulking.