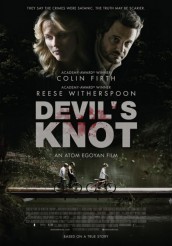 Most of us would like to think that something as outrageous, unfair and blatantly ignorant as the Salem witch trials couldn’t happen in modern America. However, when three little boys were murdered in Arkansas in May 1993, there was a modern replay, complete with superstition, a biased judge and a fervent determination on the part of authorities to blame devil worship, to the exclusion of all other possibilities.

The three teenagers – Damien Echols, Jason Baldwin and mentally challenged Jessie Misskelley, Jr. – who were charged in the case came to be known as the West Memphis Three. The case has been chronicled in the documentary trilogy PARADISE LOST: THE CHILD MURDERS AT ROBIN HOOD HILLS (1996), PARADISE LOST 2: REVELATIONS (2003) and PARADISE LOST 3: PURGATORY (2011), as well as a separate documentary, WEST OF MEMPHIS (2012)

Now director Atom Egoyan and screenwriters Paul Harris Boardman & Scott Derrickson have brought forth a drama based on Maria Leveritt’s book about the case, DEVIL’S KNOT: THE TRUE STORY OF THE WEST MEMPHIS THREE. Colin Firth stars as investigator Ron Lax, who volunteered his time to work for the defense team, and Reese Witherspoon plays Pamela Hobbs, mother of eight-year-old victim Stevie Branch (Jet Jurgensmeyer). The film moves back and forth between the investigation, the series of trials that follow, and Pamela’s emotional journey.

Director Egoyan has very successfully moved through similar terrain before with THE SWEET HEREAFTER, about a community’s reaction to an accident that claims many citizens. However, here things are lopsided. There are moments of pure kangaroo court theatre that leave us slack-jawed with astonishment and outrage, such as when the judge (Bruce Greenwood) presiding over the case rules that in Arkansas, an “expert” witness (Gary Grubbs, excellent) for the prosecution need not have a valid degree or license in his field of expertise. When we’re with Pam, we feel terrible for her as a matter of course, but there’s nothing illuminating for us about her pain or her personal discoveries.

James Hamrick as Echols and Seth Meriwether as Baldwin are especially admirable in their performances; Hamrick plays it right down the middle so that we can make up our own minds on his guilt or innocence, while Meriwether makes us feel Baldwin’s terror and admire his gumption. Kevin Durand is also noteworthy as John Mark Byers, the father of one of the victims. Firth and Witherspoon are both good, but the tamped-down tone doesn’t allow a lot of room for them to bring out nuance in their characters.

There is a lengthy set of postscripts at the end of DEVIL’S KNOT, telling us what happened after the events depicted in the movie. The courtroom drama is powerful enough to make us wish that they’d given less time to Ms. Hobbs and more time to showing us the rest of what’s known to have occurred.