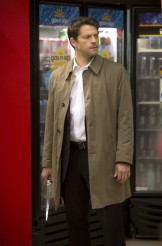 Curtis Armstrong and Richard Speight Jr. give wings to this episode 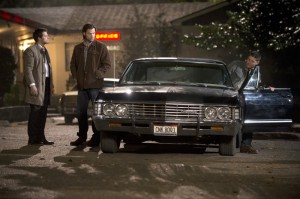 We know right away that the “Meta Fiction” episode of SUPERNATURAL is no ordinary hour of television; not that most episodes of SUPERNATURAL could be described as “ordinary,” but even by this show’s standards, we are cruising into the Straits of Gonzo. The treacherous but genial angel Metatron (Curtis Armstrong), erstwhile scribe of Heaven, clad in a fancy smoking jacket, looks up from the manual typewriter he’s using to compose a novel in his study and asks us, “What makes a good story?”

Well, here it’s the return, however briefly, of the archangel Gabriel (Richard Speight Jr.), last seen in the Season Five episode “Hammer of the Gods,” in which he was apparently killed by his brother Lucifer. Before we even get to that, we get a revamp of the opening title, in which the dark SUPERNATURAL implodes, replaced by the title METATRON, surrounded by blue skies.

Metatron is apparently crafting the story to his liking, and he is determined to be its hero. To this end, he’s sent the angel Gadreel (Tahmoh Penikett) after Sam (Jared Padalecki) and Dean (Jensen Ackles).

Meanwhile, angel Castiel (Misha Collins) is holed up in a motel room, working on tracking down Metatron. Suddenly, the TV channel he’s watching turns to an adult film intro. Those who remember the tag from “Hammer of the Gods” will have their memories stirred by the name of the place, and then we see the male lead of the piece, who rips off his fake ‘stache to reveal Gabriel, also known to us as the Trickster, who exits the TV, comes into the room and invites Cass to go with him.

Gabriel declares that he’s not dead, but has instead been hiding in Heaven. He left and has resumed his adult film industry career, but now he wants to lead the angels against Metatron. When it looks like he and Castiel are trapped in a gas station by bloodthirsty angels opposing them, Gabriel tells Castiel to run while he holds off the attackers. Then Castiel notes that a rip in his coat has magically healed itself, and stabs Gabriel. None of it is real. The adversarial angels disappear, leaving behind a slightly embarrassed Gabriel. This is all a fiction created by Metatron so that Castiel will listen to him. Well, most of it. When Cass asks Gabriel if he’s really dead, Gabriel waggles his eyebrows. This is obviously wholly open to interpretation – this reviewer’s interpretation is, yay!

Castiel finds himself transported to Metatron’s study, where Metatron points out that Castiel’s stolen grace is burning out. Metatron can offer him an unlimited supply if Castiel will betray the other angels. Castiel declines. Metatron says this doesn’t matter, Castiel is part of this story anyway – as the villain. He also can’t bear the fact that Castiel doesn’t understand any of Metatron’s literary or cinematic allusions, so the book-and-moving-loving scribe imparts knowledge of all texts, films and probably TV shows into Castiel’s mind with one simple gesture.

Meanwhile, Sam and Dean capture Gadreel. Although they torture him, Gadreel won’t reveal Metatron’s whereabouts. When he and Dean are alone, though, Gadreel mentally tortures Dean by telling him that Sam never would have died for him, that Sam has always found Dean to be weak and needy. Dean beats Gadreel up.

Metatron proposes a trade – Gadreel for Castiel. The Winchesters try to trap Metatron with angel fire – Metatron blows the flaming circle out with his breath. He’s not angry at the attempt. The Winchesters accede to the trade.

Castiel is transported back to his motel room. He finds a flock of angels outside the door, ready to follow him in a fight to bring down Megatron.

Given Castiel’s track record as a leader, it’s understandable that he finds this worrying. However, it’s still unclear how “author” Metatron sees this as Castiel being the villain. Even if Castiel messes it up, Metatron is still the entity who set all this in motion, and he has yet to look good to the viewers in his machinations, albeit he’s very entertaining.

Armstrong is a blast as the urbane albeit temperamental Metatron, but it’s Speight who really juices things up. He’s so much fun, and having so much fun, that we can practically hear the show’s engine decelerate once he’s offscreen.

There are lots of wonderful bits here, including the episode title “Meta Fiction,” i.e., fiction from Meta(tron). There are also moments of geek joy to be had when Castiel responds to a STAR WARS allusion from Dean and Sam by asking what infiltrating a space station has to do with their current situation. The boys know that a regular person would get the metaphor, but they’re blown away that Castiel at least recognizes a reference to the Death Star. This promises to be a good source of future dialectic silliness.

In story terms, Castiel could have just as easily decided to accept followers sooner – he seemed ready to do so at the end of “Captives” – but “Meta Fiction” answers one way a story can be made good: by making it fun.