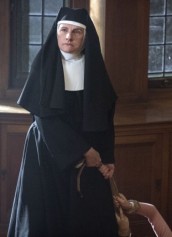 Misha Collins makes his directorial debut with a solid episode 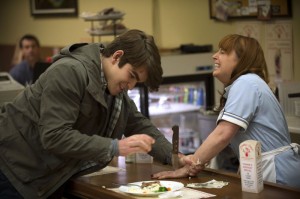 Misha Collins, known to SUPERNATURAL viewers as the angel Castiel, makes his TV directing debut with the episode “Mother’s Little Helper.” He does a good job, with some nice stylistic flourishes – shadows that appear before their owners enter frame, etc. – and gets strong work from series regulars Jared Padalecki (Sam Winchester) and Jensen Ackles (Dean Winchester).

Even though the clues suggest it could simply be a case of a spouse who snapped, Sam believes there’s something wrong in the case of a schoolteacher who beat her husband to death. However, he can’t get Dean to come with him to investigate. Dean says he’s immersed in researching the Mark of Cain, so they can find Abaddon (Alaina Huffman), though he’s also pretty busy catching up with his alcoholism.

Sam goes off to investigate solo. He finds that police have arrested a lot of people who have committed violent, aggressive acts – but who aren’t possessed by demons. However, when Sam hears an elderly woman (Jenny O’Hara) trying to tell the police that “the demons are back,” he’s all ears. The woman is a former nun, who tells Sam of what happened when she was a young novitiate at the convent at the edge of town (closed down in the present).

In 1958, Henry Winchester (Gil McKinney) – Sam and Dean’s grandfather – and the not-yet-possessed Rosie (Alaina Huffman) come to the convent to investigate possible demonic activity on behalf of the Men of Letters. The Mother Superior is possessed by Abaddon, who wants to check out the Men of Letters headquarters. She knocks Henry unconscious and plans to possess him, but Rosie – in love with Henry and mindful of Henry’s wife and kids – begs Abaddon to possess her instead. Henry, not realizing Rosie is possessed, believes they’ve successfully exorcised the convent and heads back to headquarters with Abaddon. One of the remaining nuns is Abaddon’s minion.

The minion is still there when Sam returns. We learn that Abaddon is removing people’s souls and storing them in jars until she can turn them into demons, building an army that will be loyal to her from the get-go. Sam tries to exorcise the demon minion from the body of the elderly nun, who uses demon strength to choke him. Sam is prepared for this – in an episode high point, he now has exorcism as a recorded app on his phone, which he plays in time to avoid being killed. He breaks the bottles, which allows the souls of the living to go back into their (mostly incarcerated) bodies and the souls of the dead to go wherever they’re going.

Crowley(Mark A. Sheppard), meanwhile, can’t resist hanging around Dean, taunting and analyzing him. When Dean used the First Blade, the rush he felt from the Mark of Cain was such that now he’s afraid of using it again.

The old ex-nun feels terrible for not warning Henry, but with Abaddon-in-Rosie right there in her face and the minion in the body of the remaining nun, there was no way to say anything safely. Sam tells the woman that she saved him and a lot of lives.

Sam returns to the Men of Letters bunker, now agreeing with Dean that they need to find Abaddon as quickly as possible and hitting the books.

Leaving aside the notion that it seems like somebody – hello,Crowley– ought to be able to track Abaddon down, “Mother’s Little Helper” is good. It gives the seasonal arc a sense of urgency – Abaddon has to be stopped before she acquires too many more souls – explains how Rosie became possessed and has some snappy banter. The exorcism app is a stroke of hilarious genius and it’s interesting to see how characters other than Sam behave when soulless. (Looking back, Sam seems a model of restraint.) Collins gets lively, committed work from the regulars and guest O’Hara is marvelous.

There is of course the fact that nobody is (yet) talking about the full implications of the Mark of Cain. Cain is famous primarily for fratricide, which is how he got the Mark in the first place. Shouldn’t Crowley be needling Dean about this by now? It’s understandable that Sam doesn’t mention it; after all of his wrath on the subject of Dean saving him, there’s no graceful way for him to express concern that Dean might now turn around and kill him. However, it seems a little peculiar that Dean isn’t worried, unless of course that’s what he’s really been researching. Time and future episodes will tell.