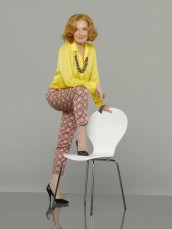 The actress talks more about Martha 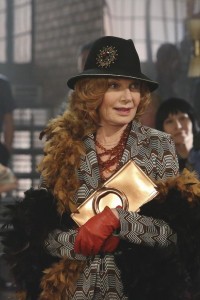 Earlier this season, Martha had a brief reunion with Castle’s superspy father Jackson Hunt, played by James Brolin – their first since Castle was conceived.Jackson left Martha and Castle both convinced that he’d used them to get to a target. We can seeJacksonlooking up with fondness and regret at the window of the room where mother and son are conversing, but they don’t see him.

Sullivan is at ABC’s party for the Television Critics Association, and she’s happy to bring us up to date with her CASTLE doings.

ASSIGNMENT X: The last time you spoke with Assignment X, you were saying you’d like to have scenes with James Brolin. Since then, that’s actually happened …

SUSAN SULLIVAN: The infamous James Brolin, yes. It was nice. I guess I had thought that there would be a little more between the two of us, but the truth is, after forty years, there probably isn’t that much to be said [laughs]. I liked the episode, I loved working with him, he was charming, and I hope he’ll come back. It was kind of a mythical type character, but that I think worked.

AX: Well, they left it that Jackson was maybe a little bit less of a jerk than the other characters thought he was …

SULLIVAN: Yeah. And that’s good. We girls always like those [jerks], don’t we? We should get over it. “I can fix this, I know I can.” You’re absolutely right.

AX: How do you think Martha felt about the reunion with Jackson?

SULLIVAN: She sort of acknowledged that somewhere in her psychology, she was hoping that she had made [a lasting impression] – it’s so egotistical, but she’s a pretty egotistical character – that somehow, she was the one that he would have to come back to, because nobody could touch her. And he came back – but then he left again. So, ha! [laughs] Life is hard.

AX: How is Martha gearing up for the impending Castle/Beckett wedding?

SULLIVAN: Well, I think she’d like to take over and plan the whole damn thing, but quite clearly, that’s not going to happen. I don’t know – I think that’ll be interesting to play out. I’m looking forward to a scene with Stana – mother-in-law, daughter-in-law, complex dynamics, so we’ll see.

AX: You had a good scene with Penny Johnson Jerald, who plays Beckett’s boss Captain Gates …

AX: You and Seamus Dever, who plays Detective Kevin Ryan, were going to have some lunches with CASTLE fans who had bid on that opportunity at charity auctions. Did those come to pass?

AX: What were the people like who went to the lunches?

SULLIVAN: They were fabulous. They were completely delightful, interesting, different. I’m so glad I did it, seriously. I’m completely fascinated by these people. You know, because I don’t Tweet, Facebook and do all that stuff, I don’t get to know who these fans are. But to sit down and have lunch with them, it was fascinating.

AX: There has been some on-camera eating in a few episodes this season, when Alexis’ boyfriend Pi, played by Myko Olivier, made meals for everyone. Do the actors actually have to eat the food, and what do you actually have on set when you’re eating it?

SULLIVAN: He was a fruitarian, so it was actually fruit, and it was pretty good and very healthy. Except way too much sugar – you cannot be a fruitarian, if that’s what they call it, because you’d be dead of diabetes.

AX: What do you think Martha’s opinion was of the relationship between Alexis and Pi?

SULLIVAN: She gave her opinion. Her opinion is, let her ride it out, let her play it out, this is what life is about. How do you learn who you are if you don’t go through these experiences? I was of course right. I love that – I love it when Susan’s right and I love it when Martha’s right.

AX: You also got to play some scenes where Martha knew that Castle had was sick with an engineered virus and might die. How were those to do?

SULLIVAN: Well, at a certain age, you start dealing with your own mortality, and that’s one of the great gifts of being an actor, is that you s get to work things through on screen, your own fears of loss. So I always find those things interesting and cathartic.

AX: Have you had a “most fun” scene to do this season?

SULLIVAN: Well, I think, because it stands out in my mind, the last scene that Nathan and I had after [Jackson] goes off, was very sweet. I liked that scene. And I thought [Jackson] looking up longingly at us was lovely, too.

AX: Do you have any sense of where Martha might be going as a character?

SULLIVAN: Oh, poor Martha. I pitch so hard for Martha to write a book [laughs], which obviously has gone by the wayside. I have no idea. I think she’ll be a little more involved with whatever the wedding thing is. I think it’s hard for them to write for her, because her story has got to always connect to [Castle], and now potentially to [Beckett]. So I get it, and it’s the same with Molly. So it’s kind of the good news and the bad news.

AX: What else are you doing?

SULLIVAN: I’m going to do a play at the Odyssey [Theatre Ensemble in Los Angeles] called A DELICATE BALANCE – it’s an Edward Albee play. It’s a Pulitzer Prize-winning, difficult, wonderful play. So we’ll be doing it during hiatus [the play runs May 3-June 15].

SULLIVAN: Well, I really quite love being on the show, and I adore – completely and utterly – being Nathan Fillion’s mother. He is such an elegant gentleman.

CD Review: THE ARTIST soundtrack
DANCING WITH THE STARS: ALL-STARS Season 15 Recap: Apolo Anton Ohno an...
THIS IS THE END Highlights this week in Blu-ray, DVD and VOD Releases
Movie Review: POSSESSOR