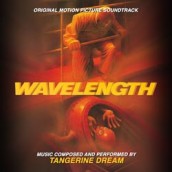 The same year that E.T. crash-landed on earth to gigantic global success, three boyish aliens were marooned in L.A. to a near-invisible ripple of recognition (unless you count how STARMAN copied their silver sphere mothership). Perhaps the most notable memento of this unassuming little sci-fi movie (which was actually made in 1981) would be its neo-futuristic score by Tangerine Dream, the German progressive group then truly taking off in Hollywood with their far more notorious 1982 soundtrack to RISKY BUSINESS. Yet that film’s alternatively meditative and rhythmic sound is also very much an identifying factor to “Wavelength,” its alien vibrations given even more of an synth-acoustical drive, especially since the rescuers of these extra -terrestrials rescuers were a guitar-picking Robert Carradine and ex-Runaways singer Cherie Curie. While WAVELENGTH‘s more propulsive cues would definitely fit into Dream’s safe breaks for 1981s THIEF, what distinguishes this score is how Dream’s unique sound speaks for the good vibrations of these visitors, their melodies creating a Zen-like, eerily beatific atmosphere that makes WAVELENGTH as close a TD non-score album, perhaps since several pieces here are in fact mutated from pre-existing album tracks and concert performances.

Dream’s style also had an affinity for capturing the spirit of the American outback, whether it’s played border agents caught in the JFK assassination of FLASHPOINT to the roving southwestern vamp pack of NEAR DARK, a feeling for burnt, deserted landscapes and Native American mysticism that WAVELENGTH resonates with in its simulated coyote howls and ethereal textures. It’s percolating computer music as correspondence to a higher power, with our evil, alien-snatching government getting the colder, sharper sounds with music that makes for an intriguing, offbeat exercise in suspense and spirituality. One of the earlier soundtracks to appear on the new CD format for Varese, and long out of print since then, La La Land gives new energy to WAVELENGTH, with insightful liner notes by UFO soundtrack specialist Randall Larson that pays tribute this unsung, indie sci-fi evolution in the band’s Hollywood profile.

Click on the link to Purchase the WAVELENGTH soundtrack