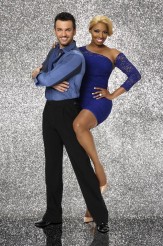 DWTS Week 7 as the hot night says adios to one and hola to top six! 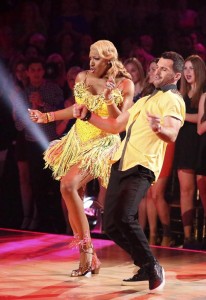 “Livin’ la vida loca” on DANCING WITH THE STARS as Ricky Martin guest judges the show on the appropriately themed “Latin Night.” Not so crazy was the elimination of NeNe Leakes who, with her partner Tony Dovolani, ended her run on the show on week seven. Meryl Davis & Maks Chmerkovskiy continue to head the leader board with a total of 78 out of a possible 80 points. Right behind them, again, is Amy Purdy & Derek Hough with 75 and then Candace Cameron Bure & Mark Ballas with 74. Danica McKellar & Val Chmerkovskiy ended the night with 72, while Charlie White & Sharna Burgess  earned 71 points and James Maslow & Peta Murgatroyd received 70 points.

The team dances are what pushed most of the couples up in the scores. Team Loca – McKellar & Chmerkovskiy, Davis & Chmerkovskiy, Purdy & Hough and Cameron Bure & Ballas  – earned 39 extra points. Team Vida – White & Burgess and Maslow & Murgatroyd and Leakes & Dovolani – earned 35 extra points. Six are left, the end is near, stay tuned.

Charlie White (Olympian) and his partner Sharna Burgess
Jerky, not his best. Goodman said his Paso Doble wasn’t special. Martin said he was flying with him. Inaba said it could be smoother.  Tonioli thought it had flair.
Scores: Inaba – 9, Goodman – 8, Tonioli – 9, Martin -10, Harland – 9

James Maslow (singer/actor) and his partner Peta Murgatroyd
Raunchy. Goodman didn’t think he ran out of gas in his Samba. Inaba thought he worked it well. Tonioli said it was filthy and he loved it. Martin said he is the gift that keeps on giving.
Scores: Inaba – 9, Goodman – 8, Tonioli – 9, Martin – 9, Harland – 9