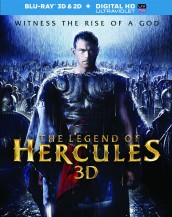 THE LEGEND OF HERCULES Highlights this week in Blu-ray, DVD and VOD Releases 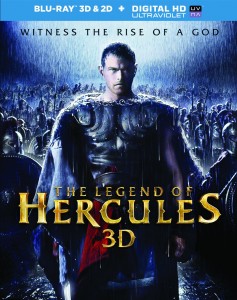 THE LEGEND OF HERCULES – Obviously there are a lot of Hercules movies coming down the pike of late. I suppose it is a follow up to all of the superhero and God type movies that have come along of late. So why not take one of the most famous Gods and give him the big movie treatment. Now the big movies doesn’t make an appearance in theaters until July starring Dwayne “The Rock” Johnson. This one, on the other hand, is nothing like what that promises to be. Starring THE TWILIGHT SAGA’s Kellan Lutz, he plays as a Hercules that doesn’t know who truly is at first until he learns of his greater purpose and must make a choice to either go with his true love or to become a true hero. While all of that sounds good, it really isn’t. This version has little to do with the original mythology and tries to play itself off more like 300 than anything else with slow motion action sequences that get tedious at best. While it appears to have a big budget it seems more like a TV movie with cheeseball lines and a really simple plotline. If you are itching for something that will tide you over until some other mythology movie comes along maybe you should check this out but otherwise skip it. 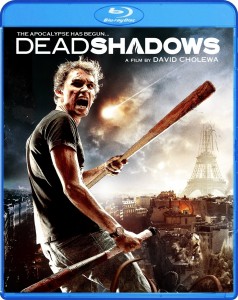 DEAD SHADOWS – A French apocalypse thriller about an alien attack on Earth after a comet passes by. While most people turn into crazy creatures with loads of weird tentacles everywhere, our protagonist Chris seems to actually be able to somewhat control the alien that’s inside of hid body and he only allows it out when he gets in real trouble – mostly when other alien controlled dudes attack him. Filmed on a very low budget and with little discernable plot at all, DEAD SHADOWS is merely OK. It isn’t about zombies, which might be refreshing. It isn’t a serial killer horror, which might also be refreshing. But as an alien horror flick it just isn’t scary at all and there are some many one-off characters that it is at times hard to figure out if that’s the chick Chris wants to bang, or the one he wants to avoid. However, the cool thing here is that Scream Factory, which has been known lately of just reissuing classic horror flicks in glorious fashion, is undertaking more modern endeavors by importing this flick to its label. That bodes well as with some of the notorious horror houses – Lionsgate and Image Entertainment – turning to more mainstream stuff, Scream Factory is gearing up. Glad to see this! 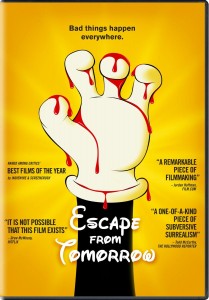 ESCAPE FROM TOMORROW – This is an odd one. Supposedly, the big hook here is that writer-director Randy Moore was somehow able to film an entire movie on location at Walt Disney World in Orlando without the permission of Disney. That’s the big hook here: The guerrilla style filmmaking. Beyond the appeal of shoving something in the face of Mickey Mouse and Co., ESCAPE FROM TOMORROW plays out as some sort of horrific fever dream filled with random and surreal images complete David Lynch style (maybe a poor man’s David Lynch). The plot involves a father losing his job at the beginning of their family holiday to the Magic Kingdom. But things start to go wrong as he sees demons in the park, starts blacking out, chasing underage girls and meeting a real-life witch or some nonsense. Filmed entirely in black and white for either artistic reasons, it doesn’t really add anything to the film. If anything it actually subtracts from how good some of the shots of Disney World looks. While the ploy to get people to think this is an anti-Disney movie is an interesting one, it isn’t necessarily anti-Disney and after you get passed the ploy, you lose interest quickly as it gets weirder and weirder. 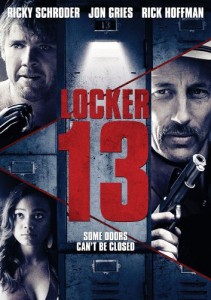 LOCKER 13 – Horror anthologies are a dime a dozen. And this falls into that category sorta. It is hard to tell because LOCKER 13 while it is an anthology, just doesn’t really have much horror to it. I have read some reviews where they compare this to THE TWILIGHT ZONE or TALES FROM THE CRYPT or whatever. Those people are smoking crack apparently. The gist here centers on a convict that gets a job a Wild West theme park as part of the cleaning crew. As part of his orientation his boss takes him on a tour and tells various stories about some of the memorabilia in the attraction. Thus, the anthology unfolds about some cursed boxing gloves, a crazy club where the hazing ritual goes wrong, a reverse suicide club and the main plot, which turns into a weird alternate life time traveling thing that just really goes nowhere and you can see the ending coming a mile away. So if you are desperate for some sorta horror anthology then this might be entertaining, otherwise probably just check it out on cable or Netflix. 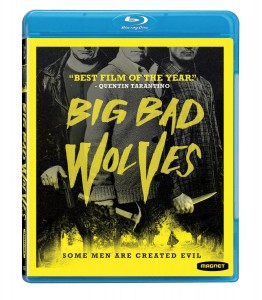 BIG BAD WOLVES – This came out last week but it needs to be here as it is a fun, brutal flick about a trio of dudes that get intertwined over the killing of a young girl or a group of young girls. A police officer is tracking a dude he thinks is a killer of young girls. Both are being tracked by another who at first appears may be the actual killer but turns out to be one of the fathers of one of the girls killed. So the police officer and the father team up to torture the dude in order to learn where he hid the heads of the girls (yep, he took their heads). However, the guy continues to insist he is not the killer. Things get even weirder when the grandfather of the killed girl also gets in on the torture. Now, there is some real good tension here and you are continually asking yourself whether or not the dude is really the killer. There is also a good twist that turns everything on its head toward the end.  This is an Israeli import and there are some really interesting interactions between Arabs and the trio as well almost in a way to show that everyone is a savage in some way not just people on the other side of a wall. Good movie and well worth your time if you like these type of tense action thrillers.

Other releases this week: