Home » THE HOBBIT THE DESOLATION OF SMAUG Highlights this week in Blu-ray, DVD and VOD Releases 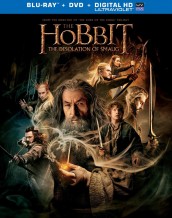 © 2014 Warner Home Video
THE HOBBIT: THE DESOLATION OF SMAUG
Reviews 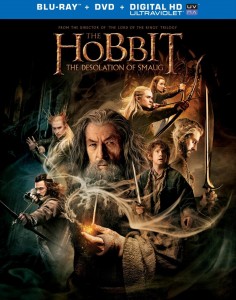 THE HOBBIT: THE DESOLATION OF SMAUG – Much like the first trilogy from the LORD OF THE RINGS mythology, director Peter Jackson ramps up the action and stakes in the second part of the HOBBIT trilogy, the very wordy THE DESOLATION OF SMAUG. Once again, Jackson makes the second film much darker, much more moody and plenty of action (and, of course, running). If AN UNEXPECTED JOURNEY was more of a faithful look at the original J.R.R. Tolkien novel complete with the famous meeting of Bilbo (Martin Freeman) and Gollum, SMAUG is something more of a liberty taken film where Jackson decides that he gave novel peeps their glory, now it is time for more action and plot. And SMAUG is filled with it from Elfish romance, to our first glimpse of the dark lord, to revenge minded Orcs, to a gnarly fire-breathing dragon that doesn’t mind a good conversation.

Obviously, if you wait to watch films on DVD or Blu-ray this is probably going to be something you want to pick up and those that love LOTR and anything having to do with it will be a must-buy. But keep in mind that every single release of the LOTR films have gotten an extended treatment. That may or may not be a good thing. Maybe three hours is enough for a film. But if you want like the three hour and 45 minute version maybe give it some time before purchasing. However, this version does include a pretty cool behind-the-scenes look with Jackson on the set and his daily adventures. It also has a featurette on filming in New Zealand and production videos that may have already been released on the Internet. 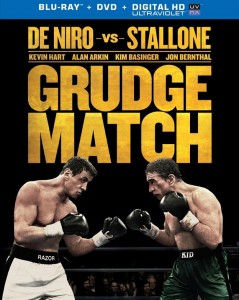 GRUDGE MATCH – Sometimes a good idea comes along to someone in Hollywood and it seems like everyone will love it because it has some big name action stars. However, the execution of the film doesn’t necessarily pay off. GRUDGE MATCH is theoretically a fight between Rocky (Sylvester Stallone) and Raging Bull (Robert De Niro) but about 30 years too late. But that’s the shtick here.  Both play former boxing rivals that each one a match against each other and never had the opportunity to square off for a third time. Now, 30 years later they get the chance when an up-and-coming business man pairs the two off – it helps that both have some desire to return to the ring; Stallone’s character needs the money and De Niro always wanted the third fight and has been itching for it for three decades. In theory, this might play out as a humorous film with two aging stars playing their age for once. But something doesn’t feel ever right about the film and it seems to miss on much of the comedy. It isn’t a bad movie but don’t expect it to be that exciting or funny. 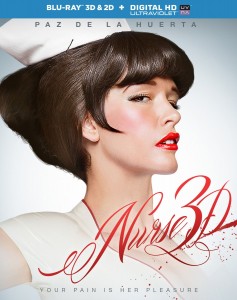 NURSE – The crazy psycho chick horror gets a slightly new twist with NURSE that is offered up in 3D and with a huge helping of nudity. Paz de la Huerta, famous for taking her clothes off in BOARDWALK EMPIRE, takes a turn as a crazy chick that by day is a friendly nurse but by night stalks cheating men across the city in a variety of locations and ends their cheating ways in the most final possible ways. She befriends a newbie nurse (Katrina Bowden) and attempts to teach her the ways of being a sexual animal that dominates men instead of being a lapdog to a caring boyfriend but she doesn’t take to it. So what’s an evil nurse to do? Frame for murder and mindf**k her until she doesn’t know which was it up from down. Now, keep in mind de la Huerta is naked a lot in the film, which to me isn’t a bad thing, and there are plenty of sex scenes, so if you are into it just for the killing and don’t want anything else you may want to pass on this one. However, if you want to see loads of nudity from hot chicks who end up killing a bucket load of people, then my friend, this is the mother load. 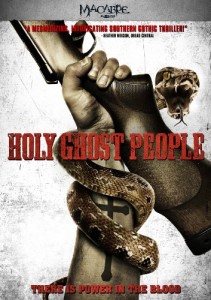 HOLY GHOST PEOPLE – This is a bit of an odd film about a hillbilly chick that takes her not-really-friend to an even deeper southern outlet where to look for her missing sister that she believes may have joined a strange church. When she finds the church, they are indeed a bunch of wackos with snake handling and all that weird stuff that you see on 20/20 and other news magazines. The sister and her not-friend become guests of the church and the longer they are there, the deeper involved they become to a point where she is in line to become married to the minister who has a lot of issues – from handling said snakes with a wild-eyed passion, to beating the living snot out of people he believes have the devil inside. As far as horror goes, this isn’t really much of a horror film although it is filled with a sense of dread throughout. The odd thing is that you expect at some point with a title the way it is to have some sort of twist or at least some interesting aspect to it but it ends up being more of a straight-laced thriller than anything. If you are into the cult type thrillers and religious mumbo-jumbo maybe it might be worth a look otherwise avoid. 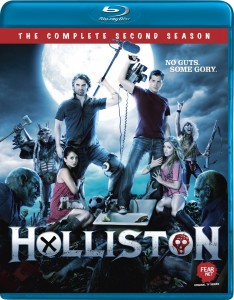 HOLLISTON: THE COMPLETE SECOND SEASON – One of the more interesting television series to come along in some while returns to video for the second season. Starring Adam Green (the guy who brought us the HATCHET and FROZEN movies – not the Disney hit), Joe Lynch, Laura Ortiz and a host of old rockers, it is a very funny horror comedy filled with every creature and plot device known to the genre. The cool thing is that they get a lot of classic horror icons to appear on the show including Kane Hodder (FRIDAY THE 13th) who shows off he can do comedy great, Seth Green and Danielle Harris. It is lucky that they got this show on Fearnet because it would never fly on a network which is a good thing considering it would be severely neutered otherwise. If you like some smart comedic horror this is definitely worth checking out.

Article Source: Assignment X
Article: THE HOBBIT: THE DESOLATION OF SMAUG Highlights this week in Blu-ray, DVD and VOD Releases