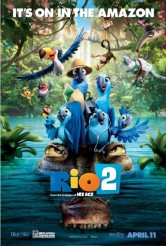 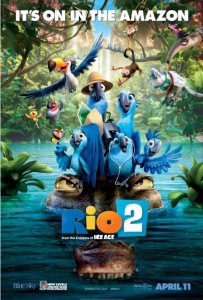 RIO 2 is a pleasing film. It has heart, a sense of humor, is very appealing to the eye and knows exactly how hard to try. In 2011’s RIO, we were introduced to rare Amazon blue macaw Blu (voiced by Jesse Eisenberg), who was birdnapped and fell off a truck as a baby, which is how he came to be raised by his human pal Linda (voiced by Leslie Mann) in Minnesota. After various trials and travails, Blu wound up with a mate, fellow rare Amazon blue macaw Jewel (voiced by Anne Hathaway), while Linda and Brazilian ornithologist Tulio (voiced by Rodrigo Santoro) fell for each other.

In RIO 2, Blu and Jewel now have three offspring and live in a huge bird house in Linda and Tulio’s back yard in Rio de Janeiro. When Tulio finds a blue macaw feather, he thinks this means that there may be more blue parrots than just Blu’s little family, and takes Linda on a journey to find see if more of the supposedly extinct birds exist. Jewel, who remembers her own wild heritage and thinks the kids are getting entirely too domesticated, persuades Blu that an expedition to find their own kind would be good for them. Would-be Carnaval act producer birds Nico (voiced by Jamie Foxx) and Pedro (voiced by will.i.am) and their toucan pal Rafael (voiced by George Lopez) tag along to see if they can find any talent in the Amazon.

There are indeed blue parrots in the jungle. In fact, they are Jewel’s old flock, headed up by her father Eduardo (voiced by Andy Garcia), who is overjoyed to see his baby girl again, even happier to be a grandfather, but very unimpressed by his human-loving son-in-law. Jewel’s handsome, heroic, suave and velvet-voiced ex-boyfriend Roberto (voiced by Bruno Mars) looks ready to swoop in should Jewel give him the least opening. Adding to Blu’s troubles, though he doesn’t yet know it, is the return of malevolent cockatoo Nigel (voiced by Jemaine Clement), who believes he has a score to settle with the little parrot. Nigel is abetted by poisonous pink tree frog Gabi (voiced by Kristin Chenoweth), who is operatically in love with him, and silent, tap-dancing anteater Charlie. Add illegal logging to the situation and peril is everywhere; add a forest full of aspiring performers wanting in on Nico and Pedro’s act, and song and dance is even more plentiful.

RIO 2 is generally gorgeous to watch, with a plot that, once in motion, bounces around like a well-handled soccer ball, often airborne, never in one place for too long. The music from the film’s composer John Powell, executive music producer Sergio Mendes and songwriter Carlinhos Brown (all returnees from the original RIO) is energetic Latin pop that will probably do well outside of the context of the movie, but here it’s especially potent when matched with visuals of brightly colored birds doing avian versions of Busby Berkeley routines. Kids young enough to play with toy trucks should be tickled by some of the vehicular craziness that takes place near the climax and the message of interspecies tolerance and ecological consideration is delivered in a way that won’t aggravate anyone who isn’t actively opposed to these concepts. The look of the film is very enticing, with wonderfully detailed feathering on the main characters and 3D that provides genuine depth when we’re given a sky-high view of the activity occurring on multiple layers below us.

There aren’t that many layers to the characters, but that’s mostly okay. It would be nice if Blu and Jewel, who’ve spent a goodly amount of time as a couple, were a little less passive/aggressive in trying to get each other to see or at least acknowledge their differing viewpoints, mainly because their behavior is more predictable than funny or dramatic. Still, they’re likable enough. Clement is a scene-stealer as the fuming, self-obsessed Nigel and Chenoweth gets a show-stopping torch song about her impossible passion for the cockatoo. There’s also something sweet about Garcia’s grandfatherly joy in being “Pop-Pop.”

Light and likable, RIO 2 doesn’t dazzle us with originality, but it’s attractive and it’s fun, good enough reasons to go see it with the family.