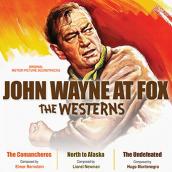 The Duke was an icon who meant manliness – and his musical accompaniment was no less rambunctiously muscular, especially when it came to the genre that he made into his own Monument Valley. But while his western scores left no doubt as to The Duke’s vitality, they each did their part to dig out even more unexpected charisma from this drawling hunk of granite, three terrifically entertaining chisels of which are presented on this Kritzerland collection. First up is a score by the composer who proved to be Wayne’s most unlikely saddle mate at strengthening his All-American image, an elfin New York Jew named Elmer Bernstein, who couldn’t have been further apart from Wayne’s beyond right wing political values – yet helped make him a national treasure with the likes of THE SONS OF KATIE ELDER, CAHILL, U.S. MARSHALL and TRUE GRIT. His 1961 score to THE COMMANCHEROS is cut from the same rousingly gutsy cloth, with a rousing hoedown of a theme that unites the score from the tom-tom percussion of the gun-running bad guys, their evil Indian cohorts rampaging down the range with some of Bernstein’s most energetic writing, reaching levels of delirium that can nicely draw comparisons with the most breathless action writing of Miklos Roza’s EL CID (released the same year). Lyrical Spanish guitars, strings as expansive as the rocky desert and trilling, heroic brass let you know exactly when the Texas rangers ride to the rescue in a score that’s a glorious checklist of everything that made the teaming of Bernstein and Wayne so great.

Romance and comedy as opposed to injun’ fighting take center stage with Lionel Newman’s breezy score for 1960s NORTH TO ALASKA. A strumming banjo, homespun harmonica, jauntily cartoonish music gambol about while playing gold fever in what’s likely the lightest score Wayne ever got. But probably the most surprising score here is Hugo Montenegro’s THE UNDEFEATED,  a 1969 movie that unites Civil War foes against Mexican revolutionaries. Once again Wayne inspires an excellent, symphonically broad-shouldered theme, which nicely interpolates southern melodies with south-of-the-border action fandangos. Montenegro has a particularly good contrast between opening up macho emotion with powerhouse horse round-up music. But what really sets THE UNDEFEATED apart from the bunch is its pop attitude for guitar and rhythm, a way of musically hipping up John Wayne that marks Montenegro as a composer of THE MONKEES, as well as the guy who creating a pop smash rendition of the theme from THE GOOD, THE BAD AND THE UGLY. You may not have to agree with The Duke’s family western values to get a huge blast of enjoyment from these wonderful scores, collected from previous releases and newly remastered by Kritzerland for examples of Hollywood’s musical myth-making at its best.