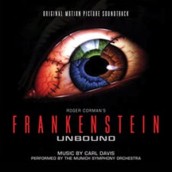 After directing over 50 movies that encompassed every exploitable subject from drag racing to drug trips and race baiting, Roger Corman retired from filmmaking with a classy bang in the horror genre that arguably brought him his greatest artistic rewards – especially when dealing with the work of such famed authors as Edgar Allen Poe and H.P. Lovecraft. For FRANKENSTEIN UNBOUND, Corman took on Mary Shelley’s seminal work, but ingeniously time-twisted it via Brian Aldiss’ novel to have a future inventor meet an 17th century blend of factual and fictional characters – let alone the era’s most notorious stitched-together monster. A class act from its high production values to the casting of such esteemed actors as John Hurt and Raoul Julia, Corman made one of his most prestigious choices in hiring Carl Davis to create a score whose lush blood flowed with the era’s melody, as well as the brassy lurching that great, old-fashioned monster scores were made of. A paradigm of the classically orchestral English sound, Davis had spectacularly put new scores to such silent movies as GREED and THE PHANTOM OF THE OPERA, while bringing bucolic, and beautiful melody to such costume dramas as THE RAINBOW, THE FRENCH LIEUTENANT’S WOMAN and the supernaturally-tinted I MONSTER and THE GIRL IN A SWING.

Conjuring a theme that played the rapture of its mad doctor’s creation, and the doom of his folly at playing God, Davis filled his FRANKENSTEIN with a resplendent sound that conveyed both the corseted period setting, as well as the brassy, lurching fury of an unholy creature seeking a mate. While the humor that suffused Franz Waxman’s BRIDE OF FRANKENSTEIN score is nowhere to be found here, Davis does an exceptional job of exhuming the stormy, symphonic music that composers like Hans J. Salter created for the black and white Universal creature features of the good old days, complete with shivering strings and pounding brass. FRANKENSTEIN UNBOUND still stands as one of the genre’s most majestic scores, put together from equal parts high society and roaring “monster” music, carrying a beautiful, Beethoven-esque sense of high-minded, melodic grace whether strolling about Lake Geneva or lugging through the Swiss countryside for Corman’s last, memorable waltz. Long a hoped-for release for fans of monster music with refined taste, FRANKENSTEIN UNBOUND has a lush sonic grandeur, with liner notes by genre expert Randall D. Larson that pay tribute to one of the finest scores to grace Victor Frankenstein’s ill-advised experiment.