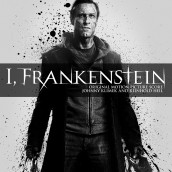 Don’t except anything remotely bucolic in the second Frankenstein’s monster score of note this month. But that being said, the aching violins that hint of his creation a few centuries ago do give pathos to the far more buff personage of Aaron Eckhart, not to mention his character’s isolated soul. And that comes in musically handy indeed when your mad doctor-made monster is swinging a sword at stone gargoyles, demons and archangels. Cut from the same flesh as the hip UNDERWORLD creature-mash series, “I, Frankenstein” revels in rhythmic propulsion to give this Shelley-meets-Satan’s minions spin its furious energy, taking the adrenalin that Reinhold and Klimek conjured for LAND OF THE DEAD‘s zombie fiesta up several, seamless notches.

While you can hear just a bit of their more sanely determined percussion for such suspenseful works as THE INTERNATIONAL here, “I, Frankenstein” is mostly battling with a canny mix of orchestra and samples, their intensity barely letting up. Given the religious nature of the film’s villains heavenly chorus also plays an effective part in the brooding, gong-ringing emotional passages when the music isn’t delivering hurtling action-horror. Lisa Gerrard’s voice also gives I, FRANKENSTEIN a nice, unholy touch. Furiously atmospheric and a whole lot of fun, I, FRANKENSTEIN doesn’t sacrificing its iconic monster’s spiritual, or human ethos amidst its epic orchestral approximation of speed Goth-rock for a soundtrack that delivers 76 minutes of bolts-and balls out ass kicking.

Click on the link to Purchase the I, FRANKENSTEIN soundtrack