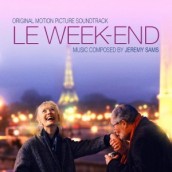 It seems to have been a while since we’ve had a really wonderful “pure jazz” soundtrack since Mark Isham’s bluesy work on such Alan Rudolph relationship films as AFTERGLOW and THE MODERNS. LE WEEK-END nicely brings back those fond memories for a wonderfully brief spell that takes listeners back to the latter score’s City of Lights, as a burned-out British couple tries to rekindle their spark on a second honeymoon.

Yet given that these aren’t young lovers swinging about artist circles during the 1930s, composer Jeremy Sams takes an entrancingly cool jazz combo approach a la Chet Baker, with a whimsically thematic sense of intimacy, a vibe for sad sax, upbeat piano strolling percussion, light strings (and of course an accordion) that has an exasperated drollness to it, getting across the feel of a couple at their last, glamorous crossroads trying to get their love life back. Having done striking, serious orchestral work for director Roger Michell on PERSUASION, THE MOTHER and ENDURING LOVE before easing up just a bit for HYDE PARK ON HUDSON, LE WEEK-END stands as Sams’ most entertaining musical collaboration for the filmmaker (a collaboration the composer wonderfully talks about in his liner notes), one that also works just as a well as a gracefully low-key jazz album that will bring a romantic slice of la Paris to any couple’s stereo system.

Click on the link to Purchase the LE WEEK-END soundtrack