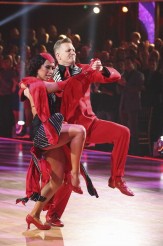 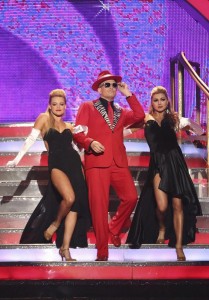 It’s party night on DANCING WITH THE STARS – week six and everyone came to party, even Drew Carey, who, along with his partner Cheryl Burke, exited the party with a bang landing in eighth place for season 18. Guest judge and party expert RedFoo came to pump up the ballroom and he succeeded. The room was lively and the people raging. Meryl Davis & Maks Chmerkovskiy ended the night with a perfect 40 after an extraordinary Tango that had the whole room in awe. Amy Purdy & Derek Hough landed in second place and Charlie White & Sharna Burgess and Danica McKellar & Val Chmerkovskiy tied for third. James Maslow & Peta Murgatroyd , after being at the top of the leader board last week, dropped to fourth place and Nene Leakes & Tony Dovolani ended the night in fifth. Candace Cameron Bure & Mark Ballas tied for last with Carey & Burke. Bure better pick it up, there is no one else to hide behind. The weak and the meek are gone. It’s on! It’s down to seven. Next week is Latin night with guest judge Ricky Martin.

Candace Cameron Bure (actress) and her partner Mark Ballas
She looked confident. Len Goodman told her that her leg action was terrific in her Cha Cha Cha. Carrie Ann Inaba said when she hit it she really hit it. Bruno Tonioli told her she looked fantastic. Guest judge Red Foo noticed she went in and out.
Scores: Inaba – 8, Goodman – 8, Tonioli – 8, RedFoo – 8, Harland – 8

NeNe Leakes (reality TV star) and her partner Tony Dovolani
A dance made for her. Inaba said this was her most comfortable dance. Goodman told her she cornered the market on the Salsa. RedFoo said she owned that dance. Tonioli told her she was one of a kind.
Scores: Inaba – 8, Goodman – 8, Tonioli – 8, RedFoo – 9, Harland – 8

Drew Carey (actor/TV host) and his partner Cheryl Burke
Fun to watch. Inaba called him the life of the party. RedFoo called him Drew Carey Trick. Goodman said he gave it his all in his Tango. Tonioli said he pimped it to the max.
Scores: Inaba – 8, Goodman – 7, Tonioli – 8, RedFoo – 9, Harland – 8

Amy Purdy (Olympian) and her partner Derek Hough
How does she do that?! Goodman said it was a  fantastic performance. Inaba told her she had great kicks. Tonioli called her a real life super hero. RedFoo said she blew his mind in her Jive.
Scores: Inaba – 9, Goodman – 9, Tonioli – 10, RedFoo – 10, Harland – 9

Meryl Davis (Olympian) and her partner Maksim Chmerkovskiy
Awesome! Inaba said there is something truly artistic with her partnership. RedFoo said her Tango was out of this world. Goodman said it was full on. Tonioli said the couple are equally matched.
Scores: Inaba – 10, Goodman – 10, Tonioli – 10, RedFoo – 10 Harland – 10

James Maslow (singer/actor) and his partner Peta Murgatroyd
Good energy. Inaba said he has proven himself to be a great dancer. Goodman said his footwork was a little heavy. RedFoo said it was very quick. Tonioli called his Quickstep wonderful.
Scores: Inaba – 9, Goodman – 8, Tonioli – 9, RedFoo – 9, Harland – 9