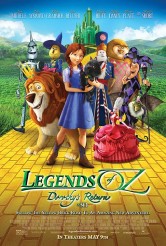 If your only exposure to Oz has been the 1939 MGM musical, you’ve missed the terrific children’s book that inspired it, THE WONDERFUL WIZARD OF OZ by L. Frank Baum. Baum wrote twelve-and-a-half more Oz books (he died before finishing the last), most of which were also continually inventive, inspired and charming. On the other hand, you’ve also missed all kinds of other screen incarnations, sequels, reimaginings and so forth, most of which have been largely ignored for understandable reasons (albeit the current plot thread on ONCE UPON A TIME is pretty cool).

Now comes LEGENDS OF OZ: DOROTHY’S RETURN. Based on the book DOROTHY OF OZ by Baum’s great-grandson Roger Stanton Baum, the 3D animated feature, written by Randi Barnes and Adam Balsam and directed byDaniel St.Pierre and Will Finn, takes us back to anEmeraldCity now under siege. Our old friends the Scarecrow (voiced by Dan Aykroyd), the Tin Man (voiced by Kelsey Grammer) and the No-Longer-Cowardly Lion (voiced by Jim Belushi) are being menaced by flying monkeys. The Wicked Witch of the West is dead, but her brother the Jester (voiced by Martin Short) has his sister’s magic in hand on conquest on his mind. The Scarecrow believes that only Dorothy (voiced by Lea Michele), who rescued Oz from the Witch, can defeat the Jester, so he summons her via a rainbow transportation device.

Even though it’s been years in Oz, in our world, it’s only been a day in our world since Dorothy’s adventures. This story is set in what looks like our present. Dorothy wakes up in a half-destroyed house inKansas, with her Uncle Henry and Aunt Em ready to evacuate. An evil government surveyor is running around town, condemning buildings and causing an exodus. Dorothy is determined not to leave – at least, until she gets taken back to Oz. Once there, she knows she must set things aright. With the Scarecrow, Tin Man and Lion all in the Jester’s clutches, Dorothy acquires some new companions, voiced by Oliver Platt, Hugh Dancy, Megan Hilty and Patrick Stewart.

The 3D aspect of the animation works well enough, but nobody involved seems to fully know if they want to go for nostalgia or a new look, so everything is somewhere in between. Dorothy wears the blue gingham that Baum described in his original book, and the Scarecrow, Tin Man and Lion resemble W.W. Denslow’s illustrations for it, but the Jester looks a bit like the Joker. The dialogue is curiously flat in the manner of a Saturday morning cartoon, where everything is spelled out and the jokes are too bland to amuse either children or adults.

There’s also a rather bizarre subplot regarding the condemned buildings in Dorothy’s town. The government surveyor is meant to be a bad guy here, but the buildings look truly unsafe – telling people to leave structures that might collapse on their heads at any moment seems more sensible than malicious. This particular development ends in a way that is just as puzzling as what came before, as though someone noticed that the movie was starting to put forth an arguable political message and decided to quash it at the last moment. What the heck this has to do with the nature of Dorothy’s quest in Oz is a whole other question; a metaphor seems intended, but it’s a stretch.

To be fair to the filmmakers, there are reasons that LEGENDS ought to work – L. Frank Baum’s books were episodic and whimsical. However, whimsy requires a light touch, and this movie makes every point too hard, even when the story doesn’t back it up. Trying to teach lessons about love and loyalty only work when we see real bonds between characters, not just when we’re told they’re present.

The voice actors do their best, and HANNIBAL fans may want to check the film out to hear Hugh Dancy not only speaking in his real accent as a law-abiding citizen of Oz but singing a romantic ballad with Megan Hilty.

Otherwise, LEGENDS OF OZ: DOROTHY’S RETURN seems as though it wants a sense of wonder, but it’s far too schematic (and clumsy of tongue) to soar as fantasy should.