Home » CD Reviews: THE BLUE MAX: THE LIMITED EDITION and THE LIST OF ADRIAN MESSENGER soundtracks 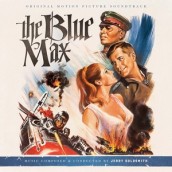 CD Reviews: THE BLUE MAX: THE LIMITED EDITION and THE LIST OF ADRIAN MESSENGER soundtracks

At long last, we can cross cross off the collectors' checklist for two of Jerry Goldsmith's best scores 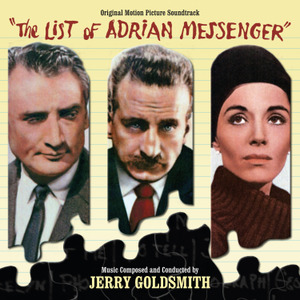 Jerry Goldsmith came roaring out of the gate in the mid-60s to impress Hollywood with his seemingly boundless talent to play any number of genres. And two of his best scores from this furiously creative period couldn’t be more apart, or more in demand from Goldsmith collectors than 1966s THE BLUE MAX and 1963s THE LIST OF ADRIAN MESSENGER, one a soaringly romantic exercise in the nobility of battle, and the other a playfully insane game of all-star masquerading murder suspects that at last get the releases they’ve long-deserved on special editions from La La Land and Varese Sarabande Records.

Many scores have tried to capture the magnificence of flight, but few have captured the physical, and emotional rush better than THE BLUE MAX. While it’s doubtful Hollywood was going to make a movie like this about a Luftwaffe air ace during WW2, the supposed chivalry of WWI gave allied funding to this blazing spectacle about a vainglorious pilot’s pursuit of the illustrious titular medal. Given the dashing son of a bitch embodied by George Peppard in his best role, Goldsmith uses a Teutonic flavor for his lofty themes, music that positively rings with the bells of the Valkyries, while the register is lowered considerably for the pounding trench warfare below, inexorably building in tandem as the tide of battle is turned against the Germans. Its ominous, marching militarism versus the purity of knightly combat, music so palpably joyous at its heights that wind machines make the listener positively feel the air blowing in their face while spinning cartwheels above the enemy.

Yet there’s a brooding sense of the inevitable fate that turns war heroes into the stuff of state-sponsored myth, from a beautiful melancholy love theme to the neo-Wagnerian strings and brass that bring the a flawed hero to the finality of earth. THE BLUE MAX still rings as one of Goldsmith’s most symphonically sumptuous and mythic scores, a masterwork that shows the power of a fully unleashed symphony, a quality no doubt responsible for the many issues this score has received from LP to CD, each seeking to be a notch above the other in sonic quality and newly revealed music. But this two-CD edition is truly the be-all end-all BLUE MAX, offering the complete score, its original complete album presentation, plus alternates and jaunty Germanic source music, with its photo-filled booklet that offers both Julie Kirgo’s liner notes and Jeff Bond’s track-by-track analysis, which does a yeoman’s job of detailing where a score astonishingly unused for the most part in the film itself ended up on record.

While Goldsmith certainly had lofty aspirations with THE BLUE MAX, THE LIST OF ADRIAN MESSENGER is the composer at his most humorously macabre, in this case taking on the multiple, masked identities of a master villain out to murder his way up to an inheritance. The names on his hit list offer a wealth of droll thrills that plays like the Hitchcock comedy Goldsmith never got to score – though MESSENGER‘s director John Houston was no doubt pleased with this soundtrack’s clever twists and turns. If anything, MESSENGER‘s origin stems from the composer’s black-humored work on such TV shows as TWILIGHT ZONE and THRILLER, especially given episodes awash in twisted psychology and moral reckoning, ideas that Goldsmith took an elegant approach with for the Oscar-nominated psychoanalysis of 1962s FREUD. But here the gloves are off, as Goldsmith fills ADRIAN‘s score with with leering, jazz-meets-Baroque creepiness, conveying the murderous confidence of a trickster villain who’s very sure of his abilities (perhaps the only psychological characteristic this score might share with THE BLUE MAX).

Delightful horror tropes like the Theremin’s wavering electronic voice mixes with ghoulish harpsichords, malefic fiddling and lurching strings for a goose bump-inducing score that could play equally well as one goes creeping about a haunted house – as led by a catchy, devilish tango theme. But ADRIAN MESSENGER is far from a one-note collection of gleeful chills, as Goldsmith brings the score, and murders to a dashing fox hunt climax that trumpets with the glory of the English blood scent, as the theme takes full, bounding flight with brass blaring, orchestral rhythms galloping and symphony stabbing a la Herrmann – the kind of rollicking pursuit the composer would engage in far later to truly satanic effect for his OMEN scores’ FINAL CONFLICT. With just about every Goldsmith “bottle cap” now released, Varese’s crossing of f of this LIST is perhaps the last great uncorking of the maestro, and this decades-old score comes across as psychotically fun, fine wine for producer and impassioned liner note writer Robert Townson. Indeed, hearing the composer cap off the ghoulishness that’s come before with a star unmasking parade for French accordion, circus music and soft shoe percussion reveals Goldsmith as a murderous merry prankster par excellence.

Click on the link to Purchase the THE BLUE MAX: THE LIMITED EDITION soundtrack

Article Source: Assignment X
Article: CD Review of  the THE BLUE MAX and THE LIST OF ADRIAN MESSENGER soundtracks