Home » Exclusive Interview: Shane West on SALEM and the end of NIKITA 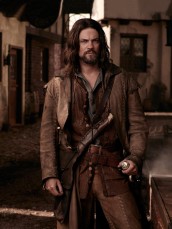 Exclusive Interview: Shane West on SALEM and the end of NIKITA 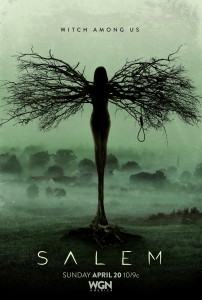 Shane West is sneezing, but he explains he hasn’t picked up the cold that’s affected a lot of people in the vicinity. “Oh, no. I have a beard that’s been driving me crazy. I haven’t had a beard like this ever, I think, in my life. And it’s fine, it’s great for the role, but I’m consistently all of a sudden sneezing and my nose is scratchy always. It’s a weird thing, but it’s true.”

So perhaps he’s developed an allergy to his own facial hair? West laughs and says it’s possible. “Yes. I’m allergic to everything now, even though I was perfectly fine two months ago.”

This is because West is in the midst of playing John Alden in SALEM. It’s the 1690s and John returns home after years away to find his hometown in the grip of hysteria about witchcraft and people are being wrongfully accused. What John doesn’t know is that some of the pious accusers are witches themselves, led by his beloved Mary Sibley (played by Janet Montgomery).

West just wrapped up four years as the covert operative Michael on NIKITA – other credits include Dr. Ray Barnett on E.R., Tom Sawyer in the feature LEAGUE OF EXTRAORDINARY GENTLEMEN and the late singer Darby Crash in WHAT WE DO IS SECET, a film that West helped get made. He’s here at the WGN America session for the Television Critics Association to talk about SALEM, which is WGN America’s first original series, created by Adam Simon and Brannon Braga. The series films inShreveport,Louisiana, which puts West relatively near his hometown ofBaton Rouge.

With a few moments of unclaimed time, West speaks with Assignment X about working on the series, as well as the end of NIKITA.

SHANE WEST: The characters on the show are the first born in the States, in the New World, so they’re not the first coming over. Their parents are the first coming over. So I like [say that} Alden is really the first American hero. Because he really is [laughs]. Because their parents weren’t from the New World. And I really feel, even though it’s the 1690s, it’s a specific period in time. He really comes off like a 1690s version of a John McClane, Bruce Willis’ character from DIE HARD. He’s the man – he is charming, but he is tough and he’s been through a lot, and a lot of the other characters don’t know what he’s been through when he was at war, when he was a prisoner of war, and he just comes back as that war-hardened veteran that, his world has changed when he re-enters his home town.

WEST: The Colony Wars, also called the Nine Years’ War, King William’s war specifically, which almost seems like it was something that was glossed over a little bit in American history, but these were the skirmishes that were always happening at the time, when the settlers fromBritain were coming over, the settlers fromFrance were coming over. They were just trying to take over, so they were fighting each other, mostly. The Native Americans were involved, but there was a lot of the British against the French.

AX: Did doing all that action on NIKITA prepare you at all for this, as far as running and jumping and hitting people?

WEST: I guess as far as running and jumping and hitting people, it helped [laughs], but it’s funny – there’s one sequence in the first episode of SALEM where John Alden throws a huge haymaker punch at somebody and I turned to the stunt guy and I was like, “I guess it’s going to be the same as NIKITA, where it was MMA moves and chokeholds and all of that.” He said, “We’re in the 1690s. All they know how to do is kick, punch and fire a gun.” So it’s made it very simple for me, because NIKITA was so complicated.

AX: So is SALEM physically easier …?

WEST: This is my first real period piece in a sense, and with the wig and the makeup and the dirt, it’s pretty exhausting. For instance, during a break between scenes, I can’t really read a book, because my fingers are covered in dirt [and would] destroy the book. It’s quite a process. I hadn’t done that before. But it keeps you really grounded and in character, which has been wonderful.

AX: We see one character cough up a toad. Let’s hope they won’t ask you to do that.

WEST: That was pretty real. I think it was maybe CGI for a second, but they literally had the frog – it was at his mouth, it was in her hands. I wasn’t in those scenes, thank God. There are a lot of bugs, a lot of roaches, a lot of maggots, all real. So far I’m okay, I haven’t had anything on me.

AX: What does John Alden believe in terms of witchcraft?? Does he believe in witches at all, or does he think this is a crock?

WEST: He firmly believes it’s a crock. He firmly does not believe in it. Things change almost immediately, but going from his background and his soul and what he’s seen, he does not believe that. He’s seen some amazing horrors during war, but those are real horrors in his world. The witches just seem ridiculous to him. Things change a little bit by the second episode where he starts to see things that he doesn’t quite believe in and knows that something’s up that he has to help. If he’s making the decision to stay in town, to stay inSalem, the town he was born in, then he has to defend it and he is prepared to do that. But I’m still unsure if he firmly believes what he sees.

WEST: It’s both. That’s how you can make a great love story – you have to have both carrying a torch, at least to a little extent. The fire has to be lit a little bit. Yeah, he comes in expecting, foolishly, after four years of something, to get his woman back and have that be unchanged, but instead finds her married to the person he hated most in life before he left for the war. So yes, the fire’s not put out, but it’s definitely damaged.

AX: The series creators have said there are some genuinely good people in town. Is John Alden one of these?

WEST: I think he is absolutely one of the good people. What happened to him as a prisoner of war may have changed him, but he apparently was always one of the good people. So he is your hero at this time. If you are watching as the viewer, you would be following John’s journey. You can follow obviously everyone’s journey, but John’s journey as the one who seems to be the voice of reason.

AX: Were you happy with the way NIKITA wrapped up?

WEST: I really was. I mean, it was very nice going in knowing that it was the final season, because it gave us time to build and work on those episodes, instead of being surprised midseason or get it canceled halfway through. So I feel we did the things that we wanted to do in those six episodes. I feel the finale especially was pretty great. I think it was nice to give everyone a happy ending. I think it was unique not to kill Amanda [Melinda Clarke] and to have her have to suffer with what she’s done for the rest of her life. I thought that was a great idea, and for the people who liked Nikita [Maggie Q] and Michael together, I think that was kind of a cool way to end it, to show that they were happy, but at the same time, they’re probably going to be fighting crime to some extent even while they’re on vacation.

AX: This was the fourth version of NIKITA – two films and a previous series – but it was the first time Michael wasn’t substantially older than Nikita …

WEST: I think it makes it a little less creepy, to be honest. We wanted to do this, not just because it might have been for a younger audience, which I’m sure was one of the reasons, but also because you can possibly believe that these two characters have a history, they have a past, they may have a future.

AX: You also got very involved with your work when you played Darby Crash in WHAT WE DO IS SECRET …

WEST: There’s [a tattoo] on my shoulder that I got when I did WHAT WE DO IS SECRET. Darby Crash had the same tattoo, and I got that to honor him and his band, getting to know his family, getting to know his friends, and all that we went through trying to make that movie, which was the entire time I was on E.R.  The three years I was on E.R., it was the only [outside] project I did, which was trying to get that thing off the ground.

AX: You were in the feature film RED SKY, which came out in March. Do you have any other projects going on now that we should know about?

WEST: No, this is it. I was very fortunate. I had three weeks “single,” as I like to call it – single from work – and booked SALEM, so this will be what I’ll be doing until May. Then maybe there will be something else.

AX: Is there anything else you would like to say about SALEM right now?

WEST: I don’t quite remember if it came up on the panel, but I think that in general people are really amazed at this show. It’s so intelligent, very well-written, the cast has been phenomenal, and none of the characters are milquetoast. There are many different levels for every character. It’s in the horror genre – we’re doing things that not necessarily every other show has done. And we’re also doing classic things and using real props and makeup effects and lighting scenes in the dark nearly with candlelight and torches and we’re having fun with it, while creating the world that is SALEM.