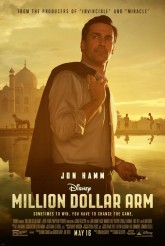 A charming, fact-based tale of culture clash and baseball

Based on a true story (photos of the real people involved and a postscript indicate the verifiable facts), MILLION DOLLAR ARM tells the story of what happens when a pair of U.S. sports agents, desperate for a new angle, hit upon the gimmick of popularizing baseball in India by bringing two young Indian athletes to America to try out for the major leagues. The film manages to tread the tightrope of being family-friendly yet genuinely entertaining and likable, with culture clash and human values sharing time in the forefront with sports.

JB Bernstein (Jon Hamm) and his partner Aash (Aasif Mandvi) have broken away from “the Death Star” (as they call their old employer) to form a new sports agency, but when a big client falls through, they are in deep trouble. Aash likes to watch cricket. JB doesn’t, but he realizes that India is one of the few world markets where baseball has yet to make a dent. His big idea: have a contest in India where the two best pitchers will be brought back to theU.S.to train for tryouts with the majors. His investor Mr. Chang (Tzi Ma) agrees to fund this – but on a timeframe so short that retired scout Ray (Alan Arkin) and coach Tom House (Bill Paxton) both doubt it can be accomplished.

The scouting trip has its ups and downs, but finally yields two young men with remarkable pitching arms, Rinku (Suraj Sharma) and Dinesh (Madhur Mittal). Neither of them has ever played baseball (and neither likes cricket), but both are determined to lift their families out of poverty. When they come to theU.S., the aspiring athletes, plus translator and baseball enthusiast Amit (Pitobash), all wind up having to stay with JB. JB isn’t happy about this invasion of his private space, but it’s hard not to thaw with this kind of company around. There’s also romance between JB and his tenant, medical grad student Brenda (LakeBell).

There are certainly cultural stereotypes here, but the inclusion of Mandvi’s Aash, who comes across like a thoroughly American harried businessman trying to provide for his family, takes ethnicity off the table. Rinko and Dinesh are extremely respectful and hard-working – which, given the amount they have to learn and the timeframe they have to do it, seems like the only way they can have a prayer of mastering the game. Sharma and Mittal are both appealing and convincing; they are persuasive as jocular young men when conversing with each other (with English subtitles), but they both have an alert intensity that makes us pull for them. Pitobash adds an extra jolt of energy and humor.

Hammgives what looks like an effortless performance, just right at every turn, as the ambitious striver who’s a bit of a cad open to redemption.Bellis just right in a role that could have easily overloaded with niceness. Paxton feels like a real coach and Arkin steals almost all of his scenes.

There is plenty of suspense about whether those fastballs can be converted into useful game play, but the real appeal here is the rapport between Hamm, Sharma, Mittal, Pitobash and Bellas a group. Who wouldn’t want to be part of their group, whether striving for a unique goal or just hanging around? MILLION DOLLAR ARM makes us want to spend time with its people, and while the movie is successful in many other respects as well, this is its biggest and best victory.