A backdoor pilot that’s not awful, just redundant in the current landscape 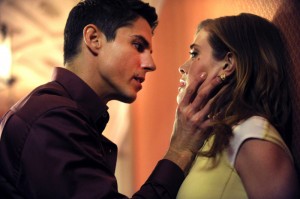 Ah, the dreaded backdoor pilot, bane of most successful shows. In its ninth season, SUPERNATURAL gets its first one (officially – there have been a few others that looked like attempts). The good news: “Bloodlines” is not nearly as bad as these things can be – it’s actually got some pep and Sam (Jared Padalecki) and Dean (Jensen Ackles) have a perfectly good reason for being part of the action. The bad news: with THE VAMPIRE DIARIES and THE ORIGINALS both still currently on the CW (to say nothing of TRUE BLOOD, PENNY DREADFUL, GRIMM and TEEN WOLF all elsewhere in the landscape), it’s not exactly like TV is lacking for shows with warring supernatural creatures and human who ally with the good ones and hunt the bad ones.

Here, twenty-year-old Chicago resident Ennis (Lucien Laviscourt) is drawn into a world he never knew existed when his girlfriend is killed outside a nightclub by some sort of monster. A war is brewing between a clan of shapeshifters, one of whom, Sal Lassiter (Bryce Johnson), dies in the incident that claims Ennis’ girlfriend, and the local werewolf family. Shapeshifter David (Nathan Buzolic) and werewolf Violet (Melissa Roxburgh) are in love, though kin on both sides are violently opposed to this relationship.

Dean and Sam hit town because they’ve heard about a supernaturally-related death. Posing as FBI agents, they interview Ennis at the police station. He’s happy to be believed by someone, but he’s quick to figure out the Winchesters aren’t really Feds. When he’s attacked by a vampire and they come to the rescue, they come clean.

Werewolf leader Julian (Sean Faris) and Margo (Danielle Savre), shapeshifter leader and sister of David and the late Sal, would love to start a clan fight that would probably drag in the ghouls, wraith and vampires, not to mention humans, but it turns out neither side is responsible for the killings of Sal, Ennis’ girlfriend and some other local supes.

The culprit is in fact a grieving human father, who captures Violet and tortures her. Dean, Sam and Ennis get the drop on the guy; when he talks about Ennis’ girlfriend as collateral damage, Ennis shoots and kills him.

Sam would like to stay in Chicago and kill monsters, but Dean gets a call from Castiel saying that he’s got a lead in locating Metatron, so the Winchesters leave town. Ennis now knows about the supernatural world and may become a Hunter – he is shocked to get a phone call from his supposedly dead father.

Meanwhile, David and Violet try working out their issues. David doesn’t understand why Violet left him. We see in a flashback that Sal warned Violet that neither werewolves nor shapeshifters would leave the couple alone if they fled town, and he threatened to kill her if she ruined David’s life by running off with him. Violet doesn’t share this with David, but she does kiss him.

When they’re in it, Sam and Dean are true to form and have some snappy dialogue. However, the clans and the romances and the threats and the et ceteras all feel much more like VAMPIRE DIARIES and THE ORIGINALS; indeed, Buzolic bears an extraordinary facial resemblance to Daniel Gillies, one of the leads on THE ORIGINALS. There’s nothing especially wrong with the format, except that it’s so readily available on so many other shows, and certainly there’s nothing here to make SUPERNATURAL fans feel that they’ll get more of what they love about the mothership show.